Toxic overload, oxidative stress, inflammation and mitochondrial dysfunction are emerging as common pathologies across a plethora of chronic disease states. A depletion of antioxidant compounds, such as L-cysteine and reduced glutathione (GSH), develops leading to reduced cell functionality, accelerated cell death and tissue injury. A diet and treatment program aimed at addressing these factors will thus represent an ideal approach to mitigating disease progression and promoting healing.

N-acetylcysteine (NAC) represents an interesting consideration for incorporation into such protocols.

In addition to NAC’s individual antioxidant functions, it also acts to promote healthy GSH levels, being a rate-limiting substrate in its synthesis. NAC therefore represents a useful tool in the management of conditions commonly associated with GSH depletion.

NAC at doses of 400mg and 800mg are demonstrated to reduce blood lead levels in workers exposed to lead. In those supplemented, oxidative stress intensity (as measure by levels of lipofuscin) was also significantly reduced, with results accredited to an increase in GSH synthesis.[1]

Moreso, NAC is known to promote methylmercury (MeHg) urinary excretion and animal studies demonstrate NAC administration to protect against the complications of MeHg exposure. In one trial, rats intentionally exposed to MeHg experienced a dramatic decrease in DNA synthesis of brain neurone and neurone precursors, a reduction in hippocampal cell synthesis and an increase in immunoreactive cells. Treatment with NAC was stated to completely abolish the toxicity effects of mercury, increasing DNA synthesis and hippocampal size whilst reducing the immunoreactive cells.[2]

A study investigating the ability of NAC to rescue the toxic effects of arsenic on male reproductive health in mice showed the antioxidant to improve the weight of reproductive organs, reduced the arsenic-induced oxidative stress in tissues and improved steroidogenesis (which was significantly compromised in arsenic exposed mice).[3]

GIT healing in combination with prebiotic fibres and a broad spectrum of probiotic species are an essential component of reducing metal toxicity and toxicity from other sources. Fibre and beneficial microbes are each demonstrated to assist in minimising heavy metal absorption/re-absorption and supporting excretion. 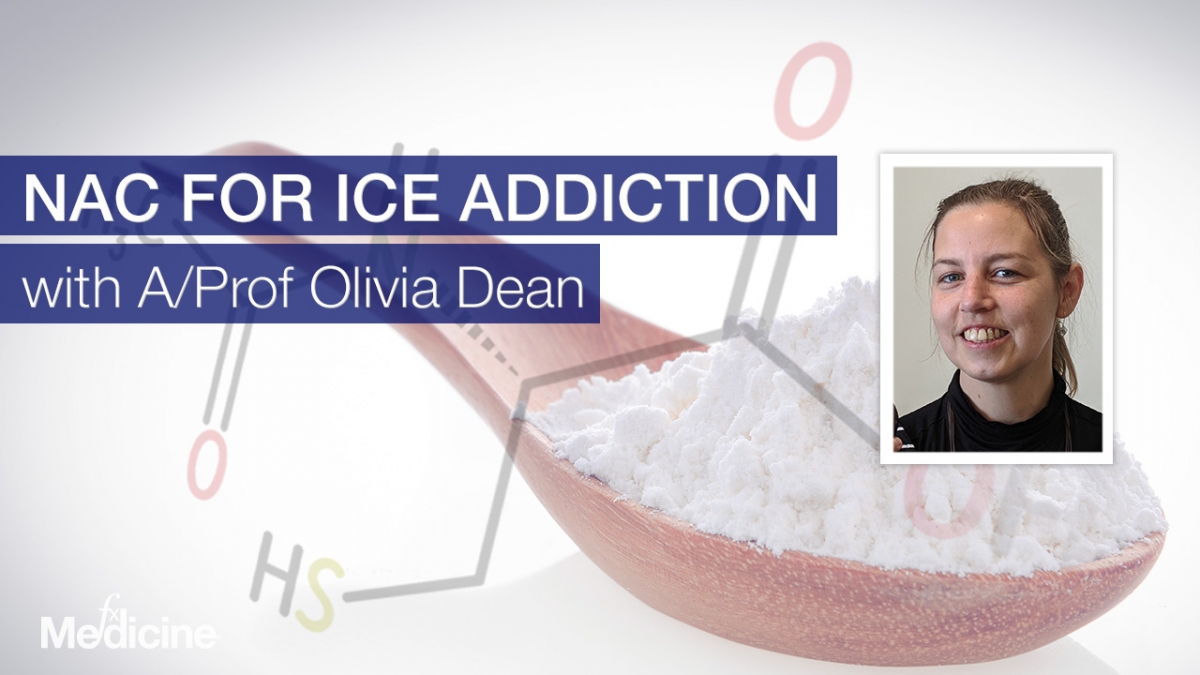 Via its ability to rescue oxidative stress, antioxidant depletion and toxicity, NAC holds the potential to also attenuate neuroinflammation and support local mitochondrial function. NAC acts to regulate glutamatergic neurotransmission, adding further to its potential as a support for neural health.[4]

Altered glutamatergic neurotransmission is believed to be at the centre of the underlying pathophysiology associated with addiction.[4,5] NAC has thus been successfully trialled for providing benefit in situations such as pathological gambling (mean dose 1476.9mg/day for 8 weeks,[6] 3000mg/day for 3 months[7]), cannabis dependence in adolescents (1200mg daily for 8 weeks),[8] cocaine desire in cocaine-dependent patients,[9] obsessive compulsive disorder (2400mg-3000mg/day for 12 weeks) and in treating trichotillomania (hair pulling) (1200mg-2400mg/day for 9 weeks).[10]

A randomised controlled trial in bipolar patients on mood stabilisers found that those administered adjunctive NAC at 2000mg/day showed a significant improvement in depression, mania, quality of life and social and occupational functioning compared with placebo.[11] The literature on the therapeutic effect of NAC in psychiatric disorders, including bipolar disorder, further supports its benefit in patients with bipolar depression.[12] NAC is well tolerated by patients with bipolar disorder, when taken for 8 weeks (2000mg/day) to achieve a positive response.[13]

Further considerations for supporting neural health include magnesium, zinc, high dose fish oil and SAMe. In view of the gut-brain connection, support for intestinal integrity and correction of dysbiosis are also an important consideration.

One in 20 Australians over 55 suffer from COPD and it is the fifth leading cause of death in Australia.[14] COPD is a chronic multifactorial disorder associated with inflammation, toxicity (e.g. from cigarette smoke and other inhaled toxins) and high oxidative stress in the lungs. Airways narrow, alveolar walls are damaged resulting in smaller numbers and mucus accumulates leading further to restricted airflow. Contributing factors to the disease include emphysema (smoking is the major cause of COPD), chronic bronchitis, small airway disease and asthma.

High levels of local oxidative stress initiate the inflammatory processes associated with COPD. Furthermore, positive correlations have been identified between antioxidant levels (e.g. glutathione peroxidase in erythrocytes) and forced expiratory volume, whilst lower antioxidant levels were also associated with a more severe type of COPD and a history of COPD exacerbations. COPD patients have a higher risk of cardiovascular disease which is likely related to the redox-mediated vascular dysfunction noted in these individuals.[15]

NAC represents a potential treatment for COPD due to its antioxidant capacity, its ability to increase GSH levels, plus anti-inflammatory and mucolytic effects. NAC is able to break the disulphide bond in the mucin monomer, ultimately reducing mucus viscosity. Further more the antioxidant has a mucoregulatory effect, inhibiting hyperplasia of mucus-secreting cells and reducing the expression of the MUC5AC gene (involved in mucus secretion).[15,16]

While lower doses (600mg/day) used in the short term have not achieved desired results in COPD patients,[17] higher doses of 1200mg/day achieved significant reductions in inflammation, prolonged the time to second and third exacerbations and increased the chances of remaining exacerbation-free (when compared to placebo, during the trial period).[18]

Further recommendations to support COPD patients include anti-inflammatory and antioxidant curcumin, vitamins A and D3 (deficiency of these vitamins are common in COPD) and mucolytic proteolytic enzyme therapy. Smoking cessation of course is vital.

Male and female infertility are incredibly complex issues, however toxicity and oxidative stress are known etiologic factors. Evidence suggests that in certain situations NAC can be useful in achieving improvements in parameters such as ovulation and sperm morphology.

A recent review of studies conducted in women with polycystic ovarian syndrome (PCOS) concluded that NAC (1200mg-1800mg/day in divided doses) showed significant improvement in pregnancy and ovulation rates compared to placebo (with further trials warranted).[19] One study concluded that NAC (1800mg/day) improves oocyte and embryo quality and could be administered as an alternative to metformin.[20]

NAC’s benefit for PCOS patients are believed to be its antioxidant actions. It is hypothesised to improve insulin receptor activity and improve insulin secretion in response to glucose. The improvement in insulin receptor activity in hyperinsulinaemic subjects results in decreased circulating insulin which significantly reduces testosterone and free androgen scores. NAC also appears to be beneficial in the prevention of endothelial damage, protecting against focal ischaemia (i.e. blocked blood circulation), inhibition of phospholipid metabolism inhibition, pro-inflammatory cytokine release and protease activity. When these effects are provided at the ovarian level, they also contribute to the beneficial results.[19]

When it comes to males, it is estimated that 50% of infertility cases are linked to oxidative stress. Animal studies have demonstrated NAC to prevent not only the accumulation of heavy metals such as lead and cadmium, but also to protect against reproductive oxidative stress and cadmium-induced toxic stress in the testes.[21,22]

A study conducted in men showed that NAC (600mg/day for 3 months) improved the volume, motility and viscosity of semen. When compared to placebo, the NAC treatment resulted in greater serum antioxidant capacity and lower total peroxide and oxidative stress.[23]

NAC’s detoxifying, antioxidant, anti-inflammatory, neuromodulatory and mucolytic benefits make it a useful incorporation into protocols designed to manage a variety of conditions.

Belinda is a dietitian and Senior Educator at one of Australia's leading nutraceutical companies. She graduated with an Honours Degree in Nutrition and Dietetics, and has been involved in the complementary medicine industry for over 15 years. Her key interests are immune modulation, the human microbiome and the impact they have on overall health.