Autoimmune thyroid diseases (AITD), including Graves’ disease (GD) (hyperthyroidism) and Hashimoto’s thyroiditis (HT) (hypothyroidism) are the most common form of thyroid dysfunction, with HT being the most frequent. In HT and GD the immunological mechanisms involved are closely related, while the phenotypes probably differ because of the specific type of immunological response that occurs.[1]

These conditions are characterised by circulating antibodies and lymphocyte infiltration. Most commonly, thyroid peroxidase antibodies (TPOab) and/or thyroglobulin antibodies (Tgab) are present. There is also generally an inflammatory immune profile present with elevations in Th17 and Th1 cells, together with Treg suppression.

Ensuring the absence of nutritional deficiencies is recommended as one of the first steps in managing the wellbeing of an AITD patient. Deficiencies of iodine (or iodine excess), iron, selenium and zinc have been found to impair thyroid function, whilst other deficiencies, such as that of vitamins A, C, B6, B5 and B1, phosphorous, magnesium, potassium, sodium and chromium, have all been observed in thyroid patients.[4] Improving diet quality is therefore recommended. 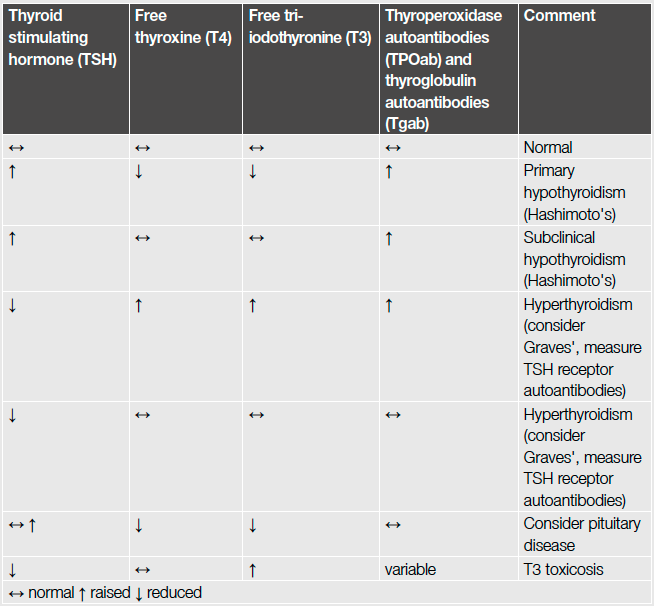 The role of iodine

Iodine is essential for thyroid hormone synthesis, and is well known for its role in healthy thyroid function. Avoidance of deficiency is important in the prevention of thyroid underactivity, however long-term excessive intake is recommended against also. This is the result of findings indicating increased iodine consumption amongst communities resulting in greater prevalence of TPOab and hypothyroidism.[3]

Iodine status and/or investigation of dietary and supplemental consumption of iodine is recommended to ensure the absence of excess or insufficiency.

Not only is selenium essential for normal thyroid function via its contribution to the deiodination enzymes involved in converting T4 to the active thyroid hormone T3, low selenium concentrations have been found to cause autoimmune processes in the thyroid gland.[3] As a result research has been conducted on the effectiveness of selenium for the management and progression of AITD (both GD and HT).

In a pilot study on GD patients, selenium therapy used concurrently with routine methimazole treatment (a thyroperoxidase (TPO) inhibitor) was compared to methimazole alone (controls) for 6 months. The addition of selenium was found to assist in achieving better outcomes for patients. Selenium supplementation achieved greater decreases in free T4 and T3, greater increases in TSH and significantly lower anti-TSH-receptor antibodies (TRAb). There was also a higher rate of remission in the selenium group compared to controls, and a higher percentage of patients achieved normal TRAb within the 6 month treatment period.[5]

A common symptom of GD is ophthalmopathy/orbitopathy (protrusion of the eyes). This is suggested to be the result of greater levels of inflammation and oxidative stress which contribute to adipose tissue expansion behind the eyes, linked to the action of inflammatory cytokines which activate orbital fibroblast secretion of glycosaminoglycans, inducing orbital fibrosis and oedema.[6]

Selenium has demonstrated its therapeutic potential as an agent for Graves' orbitopathy.

A dose of selenium (100mcg twice daily) was compared to pentoxifylline (an antiinflammatory agent) and placebo in patients with mild Graves’ orbitopathy. At the 6-month evaluation, treatment with selenium (but not pentoxifylline) was associated with improved quality of life and less eye involvement, and a slowed progression of Graves’ orbitopathy when compared to placebo. Selenium also showed benefit in slowing disease progression, whereas pentoxifylline and placebo did not.[7]

Alpha lipoic acid (ALA) has been shown to be beneficial in orbitopathy also, with suggested mechanisms of action including antioxidant and anti-inflammatory actions which prevent adipose fibroblast expansion behind the eyes.[8]

Furthermore, oxidative stress (resulting from inflammation, toxicity, etc.) is indicated to play a role in the down regulation of T4 to T3 conversion, contributing to hypothyroid symptoms. Via its antioxidant and antiinflammatory actions, ALA has been shown to restore healthy T3 and rT3 levels by downregulating the oxidative stress that interferes with normal deiodination function responsible for healthy T4 to T3 conversion.[9] This suggests the nutrient’s benefits in under activity of thyroid function.

There is a higher prevalence of coeliac disease (CD) in AITD sufferers.[10] A meta-analysis identified that approximately one in 62 patients with AITD have biopsy-verified CD.[11] Given this prevalence it is argued that patients with AITD should be screened for CD and treated accordingly. In the absence of CD, removal of gluten as part of dietary intervention remains a worthy consideration due to research demonstrating the ability of gluten fractions (gliadin) to increase the expression of zonulin. Zonulin regulates tight junction function in the gut. Elevated zonulin (stemming from gluten consumption and other factors in genetically susceptible individuals) contributes to increased intestinal permeability and subsequent lipopolysaccharide (LPS) endotoxin passage into the body.[12,13] LPS trigger the release of Th17 immune cells, which in high numbers facilitate the autoimmune disease process.[14]

In addition to considered gluten removal from the diet, certain probiotic species (e.g. Lactobacillus rhamnosus,[15] L. plantarum,[16,17] L. acidophilus [17] and Bifidobacterium longum)[17] have been demonstrated to reduce zonulin expression and assist in maintenance/restoration of intestinal integrity, while restoration of microbial diversity may also assist in achieving an increase in Treg coupled with the desired decrease in autoimmune and inflammatory Th17 and Th1 (respectively). This alteration to the immune profile can facilitate restoration of immune tolerance, mitigating autoimmune disease activity.

Evidence is mixed, however it appears that Helicobacter pylori might be a risk factor for AITD and high thyroid volume.[22] Persistent underlying infections such as H. pylori,[23] herpes,[24] Epstein-Barr virus (EBV)[25] and hepatitis C[2] have been hypothesised as potential triggers for autoimmunity and therefore an assessment to rule out their presence may be recommended. Addressing underlying infections may prevent ongoing immune activation, inflammation and oxidative stress that are the hallmarks of autoimmunity.

HT and polycystic ovarian syndrome (PCOS) are closely associated, with a number of studies showing a higher prevalence of HT, elevated TSH, TPOab and Tgab levels in women with PCOS than in controls.[26,27] Furthermore, increased oestrogen and oestrogen/progesterone ratios seem to be directly involved in the observed high TPOab levels in PCOS patients.[27]

Assessing thyroid patients (not only those with concurrent PCOS) for progesterone/ oestrogen imbalance may hence be a worthy consideration in autoimmune patients. In addition, low progesterone and high oestrogen may co-exist with prolactin elevations, another scenario hypothesised as a trigger for autoimmunity.[28,29] It is suggested that excessive prolactin secretion may favour an inflammatory environment, and decrease the suppressor function of Treg cells (which function to maintain immune tolerance), favouring then the expansion of auto-reactive lymphocytes which then favours autoimmune activation.[30]

Vitex agnus castus is suggested to be useful in latent hyperprolactinaemia, with one trial reporting it to be superior to placebo for reducing TRH-stimulated prolactin secretion, normalising a shortened luteal phase, increasing mid-luteal progesterone and 17β-oestradiol levels.[31] Anti-inflammatory/immune-modulating ingredients (e.g. curcumin and vitamin D3) may be indicated to assist in minimising oestrogen elevations, together with zinc, a suggested natural aromatase inhibitor. Detoxification support may also assist in facilitating healthy endogenous- and xenooestrogen metabolism and removal.

ALA and inositol are emerging as interesting considerations for HT and PCOS (both alone and in combination with pharmaceutical intervention). ALA (suggested dose 400-800mg)33,34 exhibits not only antioxidant and immune-modulating benefits, but also assists mitochondrial function and healthy glycaemic control. Inositol (particularly myo-inositol at 1-2g/day)[33,34] facilitates T3 and insulin function by acting as a ‘second messenger’ within target cells. This nutrient combination may therefore be indicated for patients experiencing insulin resistance, altered metabolism and inflammation associated with HT and/or PCOS.

In conclusion, considering each of the factors discussed, together with stress management, may assist patients with AITD. It is worth highlighting that research has demonstrated certain nutritional therapies to enhance the outcomes patients achieve through pharmaceutical drug intervention, however it is recommended to monitor patients closely and consider potential nutrient/drug and nutrient/herb interactions prior to prescription.

The Bi-directional Relationship between Sleep, Immunity and Infections
Jul 6, 2022    Article