N-acetylcysteine (NAC) is well recognised as an antioxidant, and precursor to glutathione. As such it is often prescribed for addressing conditions associated with toxic overwhelm (e.g. paracetamol overdose), oxidative stress and immune dysfunction.

Based on its role as a precursor to the antioxidant glutathione, and its action as a modulating agent of glutamatergic, dopaminergic, neurotropic and inflammatory pathways, NAC has shown promising benefits in psychiatric disorders including addiction/substance abuse,[1] autism, obsessive-compulsive spectrum disorders, schizophrenia, depression and bipolar disorder.[2] NAC has been demonstrated to assist in the improvement of fertility in patients with polycystic ovarian syndrome (PCOS) at 1200-1800mg daily in divided doses,[3,4] and is useful also in chronic obstructive pulmonary disorder (COPD) at doses of 600mg twice daily.[5]

NAC’s mechanisms of action in the management of COPD include its antioxidant and inflammatory actions to assist in minimising local airway swelling, together with its mucolytic benefits. NAC is able to break the disulphide bond in the mucin monomer, ultimately reducing mucous viscosity. Furthermore the antioxidant has a mucoregulatory effect, inhibiting hyperplasia of mucous-secreting cells,[6,7] and reducing the expression of the MUC5AC gene (involved in mucous secretion).[7] In addition, glutathione is essential to the functioning of specific immune cells, and via its role in supporting healthy glutathione synthesis, NAC can assist in minimising infection risk. It is NAC’s mucolytic role, in combination with additional influences on oxidative stress that appear to make it useful in persistent, antibiotic-resistant infections. Research demonstrates that NAC can be used in combination with antibiotics or other antimicrobial agents to enhance a pathogenic bacterial colonies’ susceptibility to the effects of such treatments.

...depending on the organism and type of antimicrobial and experimental system, biofilm bacteria can be up to a thousand times more resistant to antimicrobial stress than free-swimming bacteria of the same species.

What makes an infection persist?

One key way in which an infection becomes persistent (e.g. drug resistant Helicobactor pylori, chronic upper respiratory and gastrointestinal infections) is via the formation of biofilms. These biofilms can protect microbial colonies from exposure to the environment (including the immune system) and antimicrobial agents (e.g. antibiotics, antimicrobial herbs), while assisting the colony in attachment to a surface. In fact, depending on the organism and type of antimicrobial and experimental system, biofilm bacteria can be up to a thousand times more resistant to antimicrobial stress than free-swimming bacteria of the same species.[8] It is estimated that 60% of all human infections and 80% of refractory/chronic infections (i.e. unresponsive to medical treatment) are attributable to biofilm colonies.[9] When it comes to chronic infections, it has become clear through research that bacteria are able to persist on mucosal surfaces through formation of these biofilms; interestingly, biofilms are considered to be the most ubiquitous and successful forms of life on earth.[10]

The biofilm is an extracellular polymeric substance (EPS) matrix which is composed of a wide variety of materials including polysaccharides, proteins, nucleic acids and lipids.[10]

The general process of biofilm formation involves adhesion of free-living or “planktonic” bacteria to a surface, which subsequently develop into microcolonies and form a biofilm.  As the biofilm continues to grow several things can happen; the biofilm may spread into uninfected areas as environmental conditions allow and, occasionally, cells will detach from the biofilm and re-enter a planktonic (i.e. “free swimming”) mode. These planktonic cells can then repeat the cycle, infecting new surfaces (figure 1).[11] 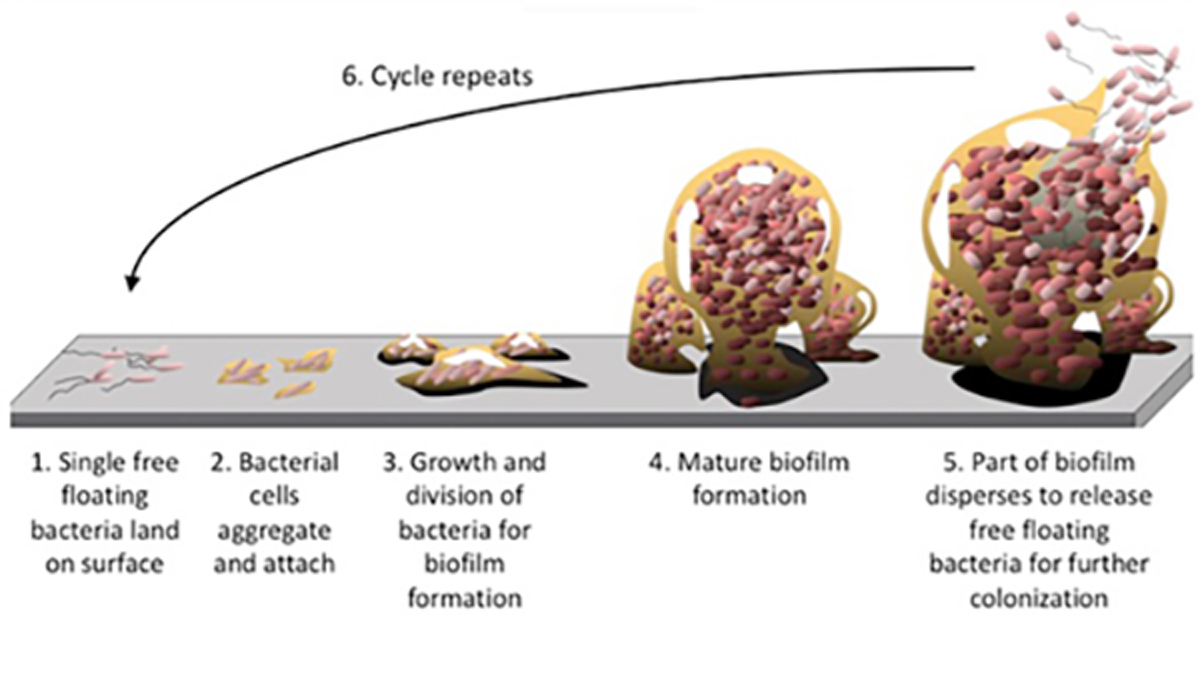 There are multiple natural substances which have been identified as useful for the inhibition and/or disruption of biofilms, and these include berberine[12] (e.g. from golden seal and phellodendron), ellagic acid (e.g. from pomegranate)[13] as well as proteolytic enzymes such as serrapeptase.[14] Furthermore, NAC is noted to be not only a mucolytic agent (useful for breaking down the slimy components of the biofilm), but also to possess the ability to reduce the production of the EPS, and to promote the disruption of mature biofilms.[15]

An important step involved in the bacterial formation of microcolonies, their virulence and biofilm formation, is the release of quorum sensing chemicals. Put simply, quorum sensing is a process through which bacteria communicate in order to determine the local population density. Once quorum sensing substances reach a certain concentration (due to high populations of like microbes), this is detected by the inhabitants and can result in activation of gene transcription within the micro-organisms. This gene expression sees the “switching on” of virulence factors (e.g. the release of harmful toxins), or can begin the process of microcolony and subsequent biofilm formation.[16] Due to the growing concern of antibiotic resistance, researchers are also looking to understand not only what substances may be used to inhibit and disrupt biofilms, but also what may possess the ability to inhibit quorum sensing.

NAC has demonstrated in early studies, the ability to inhibit quorum sensing chemicals to thus prevent infection development (e.g. Pseudomonas aeruginosa commonly infecting cystic fibrosis sufferers). It is suggested that this function is owed to the antioxidant capabilities of NAC. Reactive oxygen species seem to be responsible for activating the quorum sensing pathways, which is inhibited by NAC’s ability to suppress hydrogen peroxide activity and the master quorum sensing regulators. This effect on hydrogen peroxide was also able to inhibit the toxin release from P. aeruginosa, as virulence factors such toxin secretion is also stimulated by oxidative stress.[17]

Standard triple therapy consisting of proton pump inhibitors (PPIs), amoxicillin, and clarithromycin, has long been recommended as first-line therapy for H. pylori infection. However, the eradication rate of this triple therapy has been decreasing because of increasing antibiotic resistance.[18]

In two randomised controlled trials on H. pylori, pretreatment with NAC, before an antibiotic therapy against the H. pylori- mediated biofilms, showed that NAC achieved an increase in permeability of antibiotic treatment, resulting in the overcoming of drug resistance and eradication of pre-formed biofilms. In addition there was an observed reduction in gastric barrier mucus thickness and reduction of mucus viscoelasticity.

It is no surprise that biofilms play an important role in chronic otitis media (ear infections), sinusitis, tonsillitis and adenoiditis (infected adenoids). Studies have been carried out on both the use and the efficacy of NAC in the breakdown of biofilms related to pathogenic culprits of these persistent conditions, and it has been shown that NAC, used at different concentrations, is able to reduce bacterial adhesion in several of these areas, making NAC an important consideration in chronic cases.[19]

P. aeruginosa is a common pathogen in chronic respiratory tract infections (particularly in cystic fibrosis (CF) sufferers). It typically makes a biofilm, making infection treatment difficult. In a study investigating the inhibitory effects of NAC on biofilms produced by P. aeruginosa, results demonstrated that NAC holds antibacterial properties against the pathogen, and may detach P. aeruginosa biofilms. It is therefore suggested that NAC may be a new strategy for the treatment of biofilm-associated chronic respiratory infections due to P. aeruginosa, and further research is warranted.[20]

Dental plaque is one of the more obvious and tough-to-treat forms of biofilm. As a compound with a wide safety margin, NAC has demonstrated the potential as a therapy to be used as an antiplaque, bacteriostatic agent for managing chronic dental decay. The potential anticaries benefit of NAC is directly related to reducing the biofilm coverage which reduces the degree of acid generation and the amount of time that the surface is exposed to the lower pH.[21]

In conclusion, NAC represents an interesting consideration to promote the resolution of persistent infections which may have previously resisted standard antimicrobial treatments. It not only demonstrates the ability to interfere with bacterial communication and suppression of virulence factors, but inhibits biofilm formation, disrupts mature biofilms, assists with mucus breakdown and provides local anti-inflammatory and antioxidant benefits.