Detoxification is a term often synonymous with short-term programs promising a feeling of wellness, vitality and even rapid weight loss as an almost overnight result. The reality however is that the processes of detoxification are happening within every cell every minute of the day.

Emerging research continues to support the hypothesis that toxicity is a major contributor to many chronic disease states. Many would argue that levels of individual toxins found in our food, water and environment are not significant enough to cause harm, however it is often the compounded effects of multiple poison exposure which is the greatest concern.

Humans are exposed to a cocktail of heavy metal toxicants in the environment. Though heavy metals are deleterious, there is a paucity of information on toxicity of low dose mixtures.[1]

Metal mixtures are demonstrated to result in higher toxicities compared to individual metals, with animal studies showing “low-dose” mixtures to contribute to reduced brain weight and structural lesions, neuronal degeneration, hepatocellular injury, decreased antioxidant activity and kidney necrosis.[1] This supports the need for ongoing support for the removal of heavy metals from the body and protection against their uptake.

Multiple endocrine disrupting chemicals (EDCs) are also present in the environment, and thus supporting their detoxification is essential. EDCs include a wide range of substances, both natural and man-made, including pharmaceuticals, dioxin and dioxin-like compounds, polychlorinated biphenyls, DDT and other pesticides, and plasticisers such as bisphenol A. EDCs may be found in many everyday products including plastic bottles, metal food cans, detergents, flame retardants, food, toys, cosmetics and pesticides.[2]

EDCs may interfere with normal endocrine function through their ability to:[2]

Poor diet and lifestyle (and exogenous toxin exposure) can deplete internal antioxidant and detoxification systems, contributing to increased production and poorer clearance of endogenous toxins. For example, poor intestinal integrity can lead to greater lipopolysaccharide (LPS) passage and a subsequent inflammatory cascade that, when unmanaged, depletes glutathione and sees an accumulation of harmful pro-inflammatory and oxidative substances. Poor clearance of endogenous oestrogens can also contribute to disease, so too can elevations in uncleared reverse T3.

In order to avoid toxicity effects, a diet and lifestyle which supports detoxication and detoxification of both exogenous and endogenous toxins is essential. Detoxication refers to the mechanism of preventing entry of damaging compounds into the body, whilst detoxification is the process of removing toxic chemicals from the body.

Many patients who are unwell, or living/working in a toxic environment, may benefit further from additional supplementation with specific compounds.

The role of the GIT in minimising toxic overload

The role of GIT cells must be considered when aiming to facilitate detoxication and reduce an individual’s accumulation of both external and endogenously derived toxins. It is estimated that 25% of detoxification processes occur within GIT enterocytes. These cells carry out both phase 1 (via the action of CYP450 enzymes) and phase 3 (via antiporter protein action) functions in an attempt to reduce the passage of non-metabolised xenobiotics to the internal environment.

A large portion of the toxins we are exposed to on a daily basis enter the body within foods and beverages we consume. If intestinal hyperpermeability (“leaky gut”) is present, this allows greater entry of undesirable compounds into the body, many of which can produce “toxicity” symptoms once they reach a certain threshold. In addition, leaky gut allows these potentially toxic compounds to by-pass the processes of detoxication; detoxification that would normally be carried out within the gut cells.

Furthermore, as the GIT is a major site of metabolised toxin excretion (originating from the liver), compromised intestinal integrity, combined with insufficient fibre and dysbiosis, may also lead to reabsorption of toxin metabolites otherwise bound for elimination. Research also shows local inflammation in gut cells to result in glutathione depletions which in turn may compromise antiporter protein (i.e. phase 3) function.

Correcting dysbiosis with a broad spectrum, high dose probiotic, together with dietary prebiotic fibres and additional nutrients including L-glutamine, can help not only to reduce local inflammation, but also to restore integrity to the GIT.

Moreso, beneficial micro-organisms assist detoxication by binding/sequestering damaging compounds (e.g. heavy metals mercury,[3,4] arsenic,[3,4] cadmium[3] and lead[3]). The bacterial metal-binding interactions, are believed to be largely attributed to charge attractions between the net negative bacterial cell and the positively charged metal (with exceptions such as arsenic[3]). 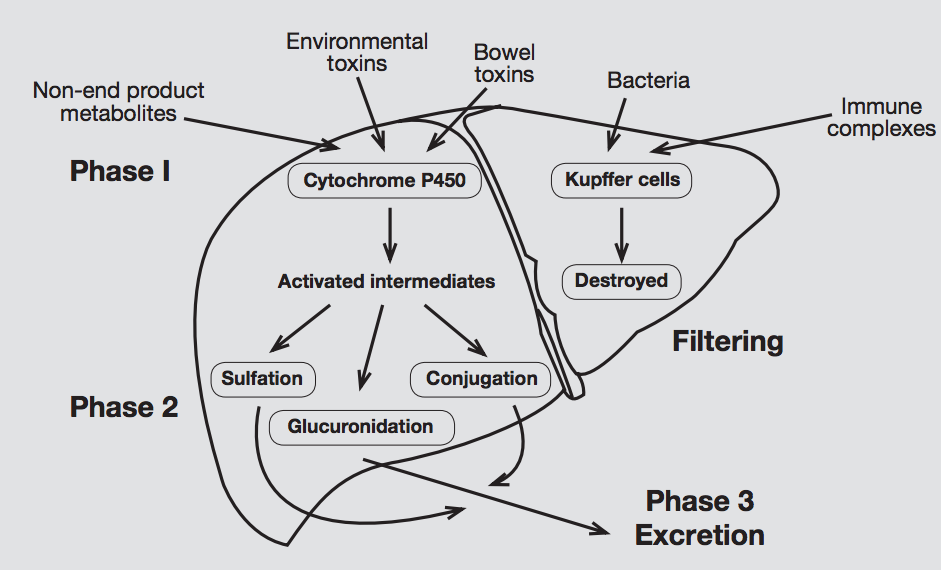 A primary route of phase 2 detoxification is glutathione conjugation. In addition to its role in conjugation, glutathione (GSH) is a significant hepatic antioxidant. If GSH is depleted by the oxidative by-products of phase 1, the GSH-dependent phase 2 activity is inhibited. GSH depletion has been suggested to represent an important contributory factor to oxidative liver damage and enhanced morbidity related to liver hypofunction.[5]

GSH is a tripeptide made up from the amino acids glutamine, glycine and cysteine, thus an adequate supply of these substrates is paramount. Foods from the brassica family (cabbage, broccoli, Brussel sprouts) are inducers of this pathway. Broccoli sprouts in particular have been found to be potent phase II inducers.[6] Glutathionation is involved in heavy metal removal, and this process can be supported by N-acetyl-cysteine, selenium and alpha-lipoic acid.

Curcuma longa and sulforaphane are also known to enhance the activity of glutathione S-transferase (GST).[7,8] Sulfurophane is a molecule belonging to the isothiocyanate group of organosulfur compounds. It is found in broccoli sprouts and other cruciferous vegetables such as kale, Brussel sprouts and cabbage. It is also well-known for its antioxidant and anti-inflammatory activity.

Due to its role in the induction of phase 1 and phase 2 detoxification enzymes (e.g. for removal of chemical carcinogens), sulforaphane-rich foods represent an ideal addition to the daily diet and to a protocol designed to facilitate healthy detox. Sulforophane also has a recognised capacity to induce the activation of nuclear factor (erythroid-derived 2)-like 2 (Nrf2). When Nrf2 binds to DNA it induces many antioxidant and detoxifying pathways, protecting cells from damage.

Glycine (and to a lesser extent taurine, glutamine, arginine and ornithine) are required for phase 2 amino acid conjugation. People on a low protein diet, and those with chronic exposure to toxins, are at risk of impaired amino acid conjugation due to substrate depletion, particularly glycine.[9]

Methylation is the conjugation of toxins with methyl groups. The methyl donor is S-adenosylmethionine (SAMe). SAMe is synthesised from the amino acid methionine, a process which requires the nutrients choline, vitamin B6, vitamin B12 and folic acid.

Sulfation involves the conjugation of toxins with sulfur-containing compounds. Nutrients needed to maintain sulfation are the sulfur-containing amino acids, particularly cysteine and methionine. An adequate level of molybdenum is also necessary for this phase 2 process.[9]

Glucuronidation is one of the primary pathways of liver phase 2 detoxification. It is responsible for the detoxification of both endogenous compounds (e.g. hormones such as oestrogen) and exogenous toxins (e.g. drugs and carcinogens). Glucuronidation combines these potentially toxic compounds with glucuronic acids forming glucuronide conjugates. These conjugates are then suitable for safe elimination via the biliary tract. This process depends on adequate levels of glucuronic acid. Fish oils and limonene from the peel of oranges, lemons, limes and grapefruits may also activate glucuronidation.[9]

Calcium-d-glucarate, which naturally occurs in fruits and cruciferous vegetables, is known to undergo conversion to D-glucaro-1,4-lactone. This substance exerts an inhibition effect on beta-glucuronidase, preventing the generation of these free toxins which may compromise local GI health, and potentially be granted re-entry into the body. Sound GIT integrity is potentially useful for prevention of re-absorption in this circumstance.

Certain pre- and probiotics have exhibited the ability to beneficially minimise beta-glucuronidase.[10,11] Furthermore, via the production and release of short chain fatty acids, probiotic fermentation of prebiotic fibres supports gut integrity, whilst certain lactic acid bacteria have also been shown to increase the activity of numerous other antioxidant (and detoxification) enzymes and substances including glutathione-S-transferase, glutathione reductase, glutathione, glutathione peroxidase, superoxide dismutase and catalase.[11]

Glucuronidation has been shown to be enhanced with green tea administration.[8] Green tea has numerous demonstrated health effects, including antioxidant functions and enhancement of detoxification via increased glutathione S-transferase activity,[12,13] glutathione peroxidase and glutamate cysteine ligase.[13]

Epigallocatechin 3-gallate (EGCG) is the most abundant green tea catechin and, like sulforophane, is shown to activate Nrf2, hence representing a key compound responsible for green tea’s role in regulating induction of phase 2 detoxifying and antioxidant enzymes.[13] Green tea therefore represents an ideal inclusion into the diet when enhancement of detoxification is the aim.

Good gastrointestinal health and local microbial balance, sound nutritional status with protein, fibre and essential micronutrient intake, together with the consumption of plant foods (e.g. cruciferous vegetables) and green tea is a useful way to support detoxication of the many potentially poisonous compounds that threaten health. 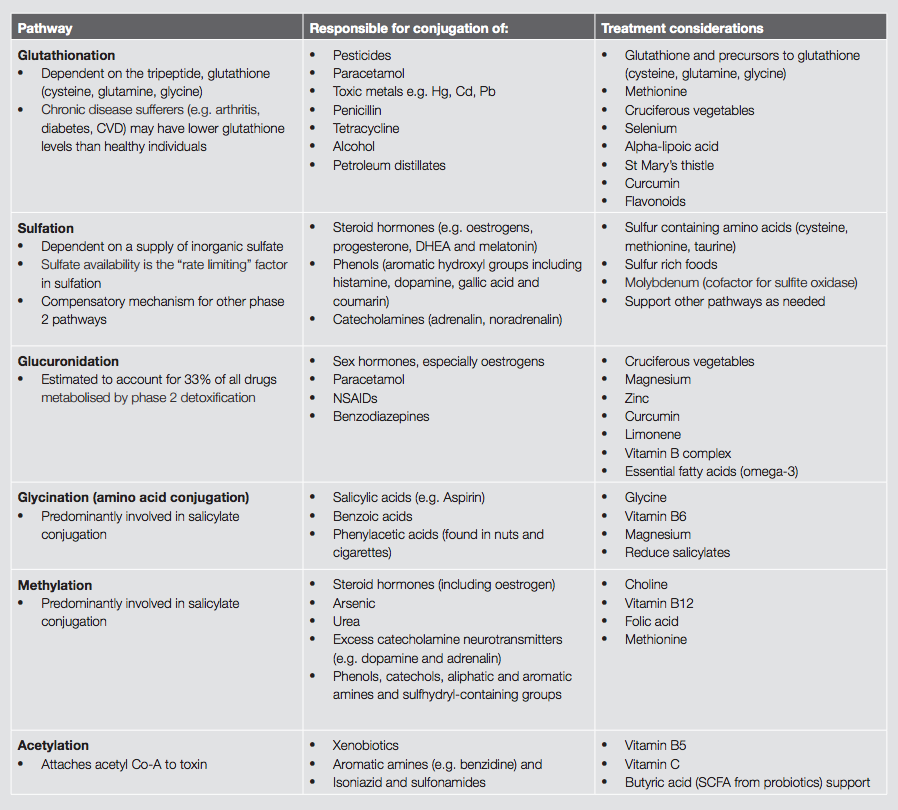