Early signs of sarcopenia may appear around age 40, but there is a dramatic decline in muscle mass between age 50 and 75 years. Concomitant with muscle loss is a substantial increase in body fat. The average adult can expect to gain about 2.2kg of fat and lose about 250g muscle every year between the ages of 30 and 60.[1]

Decreasing muscle activity is accompanied by a decline in mechanical stress and tension on the bones, a process also linked with increased calcium loss. It is well known that the early astronauts initially lost large amounts of calcium from their bones under conditions of weightlessness. We see a similar problem in hospitalised patients, who are bed-ridden and unable to walk for extended periods of time.

Studies demonstrate that the aetiology of sarcopenia can be influenced by multiple factors including loss of motor neurons, degradation in muscle protein synthesis, fluctuations in hormonal levels and a sedentary lifestyle.[2]

Although sarcopenia is a multifaceted phenomenon, to date we have a limited number of options which may positively affect protein turnover to promote the maintenance/increase of muscle mass. The two most important factors to consider are the intake of protein and resistance exercise (RE).

The power of whey protein

An adequate daily intake of protein is essential as we age, and we may wish to consider more easily digested foods such as whey, eggs, seafood and soft cheeses.

Approximately 1-1.5g protein intake per kg body weight is recommended. Up to a point, the more protein one eats the better the body is at building muscles,[3] although too much protein can cause metabolic acidosis. It’s important to eat protein-based meals with plenty of fresh vegetables, which are alkaline and balance the acidity of the protein.

Many people are now choosing to take a whey protein drink on a daily basis, to kick-start muscle protein synthesis and help prevent age-related muscle decline.[1]

Whey protein is one of the highest sources of the branched chain amino acids leucine, isoleucine and valine. These amino acids drive the production of muscle protein (especially leucine, which has been shown to up-regulate protein synthesis through activation of mTOR and elFs).[1] The benefits of more muscle mass include the production of more mitochondria on a cellular level. This leads to improved glucose and fat disposal, enhanced basal metabolic rate and increased lean body mass.[1]

There is also good research to suggest that the amino acids, cysteine and glutamine, play an important role in maintaining muscle mass as we age. When muscles are not conserved, abnormal amounts of amino acids are converted into glucose and a large amount of nitrogen is converted into urea.

We should also be aware of the regulatory circuit of amino acids between muscle, blood and liver metabolism. As soon as the urea production in the liver is too high and plasma amino acids too low, cysteine is released from the muscle and is catabolised in the liver to glutathione, sulfate and protons which down-regulate the production of urea, and instead directs the ammonium ions back into glutamine biosynthesis. This downregulationof urea synthesis and the production of glutamine shifts the whole body nitrogen economy towards muscle preservation.[1]

Exogenous protein sources improve this further. So the combination of protein-containing meals and RE act synergistically to help maintain or increase muscle mass.

L-carnitine partners well in this process of sarcopenia reduction. Supplementation has been shown to improve muscle mass and reduce physical and mental fatigue, in 66 frail centenarians, who were found to lose 1.8kgs of fat and put on 3.8kgs of muscle mass after taking 2g L-carnitine each day for 6 months.[4]

Nearly every ageing person is affected adversely by sarcopenia. Much of the frailty of old age can now be slowed-down by combining a daily whey protein drink with RE. This combination can help to preserve muscle mass and improve body composition. 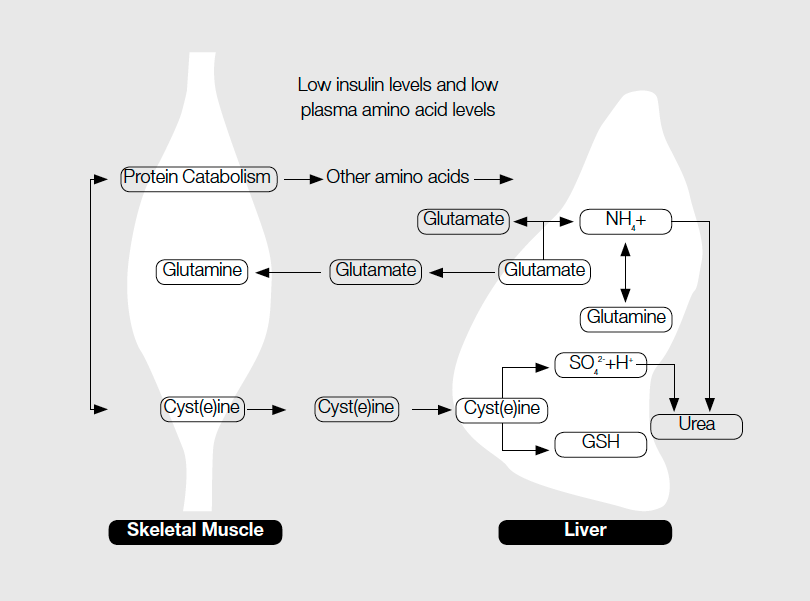 This process promotes glutathione (GSH) synthesis and a down-regulation of urea production that in turn shifts whole body nitrogen towards muscle preservation.

Spinal Dysfunction and its Impacts on the Brain
Nov 2, 2021    Podcast