The pleiotropic functionality of commensal bacteria, yeasts, protozoa, fungi and archaea present in the gastrointestinal tract is an evolving area of nutritional research.[1-3] Along with well-established roles including promoting intestinal barrier integrity; biosynthesis of energy, vitamins, neurotransmitters and short-chain fatty acids; metabolism of bile acids, xenobiotics and dietary compounds; and regulating metabolism, neurological signaling and endocrine hormone release, the gut microbiota modulate local and peripheral immune system maturation, homeostasis and responsivity.[1-3] As part of ongoing research exploring the players and mechanisms underlying this symbiotic host-bacteria relationship, a group of unique commensal organisms called segmented filamentous bacteria (SFB) have been identified as one such player that significantly influences host adaptive and innate immunity, the gastrointestinal immune barrier and potentially, inflammatory and autoimmune diseases.[3,4]

What are segmented filamentous bacteria?

SFB was initially discovered and characterised in the 1960’s with the provisional name Candidatus arthromitus, following animal research indicating a role of the organism in priming of Th17 cells and a preponderance for autoimmune disease if unabated. SFB are commensal gram-positive, spore-forming organisms genetically similar to the Clostridium genus that adhere to the ileal epithelium of vertebrate hosts. [3-5] Their colonization appears to be age-dependent and predominant below 3 years of age, with the concentration of SFB at 0-6 months, 7-12 months and from 3-75 years of age observed to be 25%, 75% and 6.2% respectively. [4,6,7] The unique characteristics of SFB compared those exhibited by general commensal bacteria are relevant to the subsequent host immune response, specifically the organisms’ morphology, binding mechanism, location and lifecycle, as well as mode of communication with host cells. [3,4]

General commensal bacteria located in intestinal mucosa use indirect modes of communication due to the local presence of mucous, immunoglobulin A and antimicrobial peptides, with mechanisms including secretion of lipopolysaccharides and short chain fatty acids, and modification of host metabolites. [3-5] This contrasts with the more direct bacteria-host communication mechanisms used by SFB known as microbial adhesion-triggered endocytosis (MATE), where cell wall-associated bacterial proteins are commuted into host intestinal epithelial cells, allowing the sampling of commensal antigens, stimulating a subsequent immune response. [5]

Specifically, SFB promotes activation of innate and adaptive immunity via a number of mechanisms, primarily preferential induction of antigen-specific CD4+ T-helper 17 cells via the transfer of SFB-derived antigens to mesenteric lymph nodes, where antigen-specific naïve T-cells convert to RORgt-expressing cells and subsequently RORgt/IL-17A-expressing cells in the ileum. These Th17 cells stimulate the synthesis of various inflammatory and immune modulating compounds including serum amyloid A, interleukin (IL)-17A, IL-17F, IL-21 and IL-22, and antimicrobial peptides. Other mechanisms include stimulation of faecal secretory IgA levels and activity, and lamina propria concentrations of T-cell receptor intraepithelial lymphocytes, interferon-g and Foxp3-containing CD4+ cells. [2-5,8]

What is the clinical relevance of SFB?

The clinical relevance pertains to the roles of these SFB-induced compounds in inflammatory processes and maintaining mucosal defense integrity against pathogens and toxins via mechanism including modulating neutrophil chemotaxis, activation and differentiation, stimulating antimicrobial peptides, factors and chemokines, ADP-ribosyltransferases synthesis and binding to antigens. [2,4,5,9]

Consequently, SFB is crucial for the development and maintenance of local intestinal mucosal homeostasis and epithelium immune barrier integrity and function against exogenous pathogens, bacterial and fungal pathogens, as well as systemic immune activation. [3,5,10]

These local and systemic effects of SFB underlie both positive and negative associations exhibited by these organisms in ulcerative colitis, psoriasis and autoimmune conditions including rheumatoid arthritis and type 1 diabetes. [6, 11-13]

Investigations to date have demonstrated predominantly positive associations between SFB and animal and human hosts, however, the need for further investigations into SFB are highlighted by animal data demonstrating pathogenic responses induced by SFB. The purported inhibitory mechanism which prevents autoimmune priming is thought to be related to commensal gut bacteria keeping inflammatory priming in check, however further investigations are required to confirm the specific commensals involved. In an animal colitis model, SFB induced a pathogenic Th17/Th1 response in the colon and rectum in the presence of Helicobacter hepaticus, however other investigations have demonstrated that SFB did not promote colitis in the ileum in the absence of inflammation or active disease. [5,13,14] In animal arthritis models, SFB colonisation has been shown to potentiate autoimmune arthritis, induce inflammation, joint thickening and arthritis, and provoke autoantibodies in the lung in the pre-arthritis phase. [15,16] Animal type 1 diabetes models have variably observed that SFB had suppressive or no effect on disease incidence. [13,17] Various researchers have suggested that a key factor potentially influencing if SFB promotes pathogenic or protective effects is the composition of other commensal bacteria. [18]

Much is still to be learnt about SFB, including their presence and prevalence in humans, other potential endogenous mechanisms of action, their role in disease onset or protection and the most appropriate use of SFB for effective clinical outcomes. [2-6] 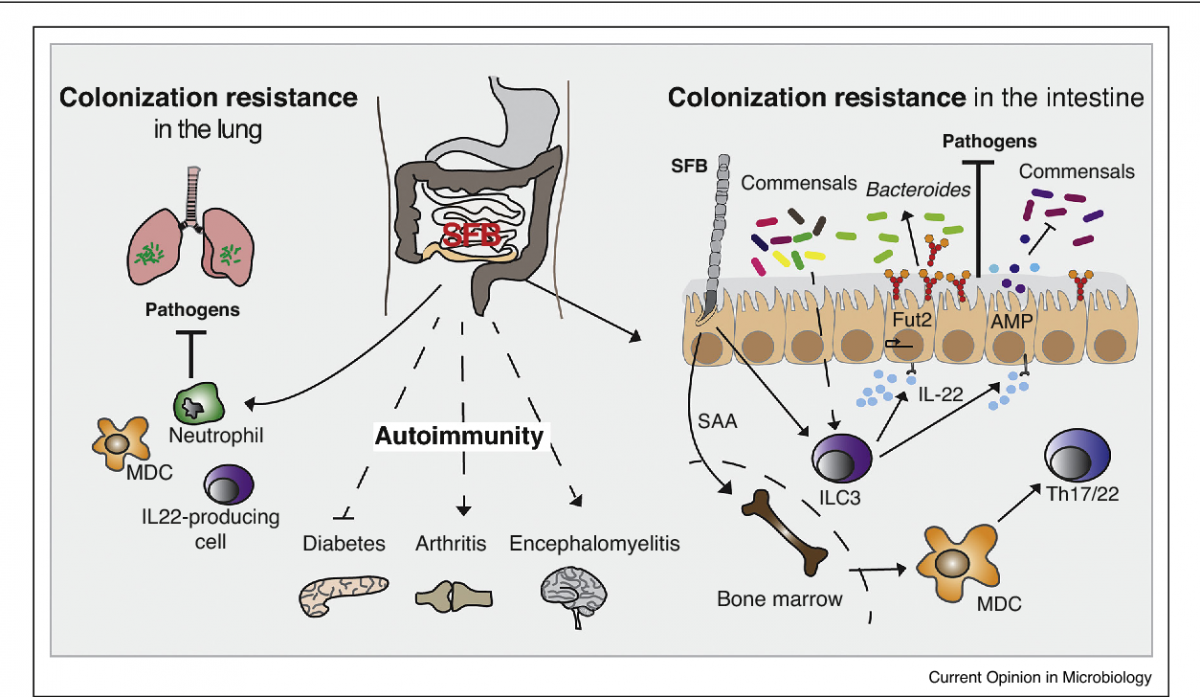