Mind-body medicine (MBM) encompasses a variety of therapies that consider the synergy between the mind, body, emotions and behaviour as well as the way in which these, combined with social and spiritual factors, can have a direct impact on an individual’s health and wellbeing.[1]

There are several therapies that form the basis of MBM and include, but are not limited to, spiritual healing, art and light therapy, massage, tai chi, hypnosis, relaxation therapies, yoga, cognitive behavioural therapy (CBT) and mindfulness meditation.[2,3]

The idea that a connection between the mind and body exists, and that treating one could influence the other, is not new. It is a concept that was readily accepted by ancient physicians and formed the basis of several of their theories on health and disease.[2]

More recently, George Engel defined a biopsychosocial model of health and illness in 1977, suggesting that behaviours, thoughts and feelings have the ability to influence the physical state and that several combined factors, from the cellular to the social, can lead to poor health outcomes.[4]

A more reductionist approach to the treatment of illness is predominantly seen in medicine today. However, this is slowly changing and the intricate interplay between various systems within the body has seen the emergence of new fields of research. These include psychoneuroimmunology (the affect the mind can have on health and disease) and psychoneuroendocrinology (fluctuating hormones and how they effect behaviour).

Mechanisms of gut-brain interaction and the connection to disease

Stress, in all its forms, can have a profound effect on overall health. Perhaps, most notably, the health of the gastrointestinal tract (GIT), which is known to be sensitive to stress and stress mediators.[5]

Research into gut-brain signalling has revealed an intricate communication system exists – the gut-brain axis (GBA) – that aids in the maintenance of homeostasis within the GIT.[6]

The GBA encompasses several systems within the body including the autonomic and enteric nervous systems, the central nervous system (CNS) and the hypothalamic-pituitary-adrenal (HPA) axis. It is a bidirectional communication channel that monitors and coordinates activity within the gut, while also connecting emotional and cognitive centres of the brain with peripheral intestinal functions. These may include motor, secretory and sensory functions along with pain perception.[6,7] 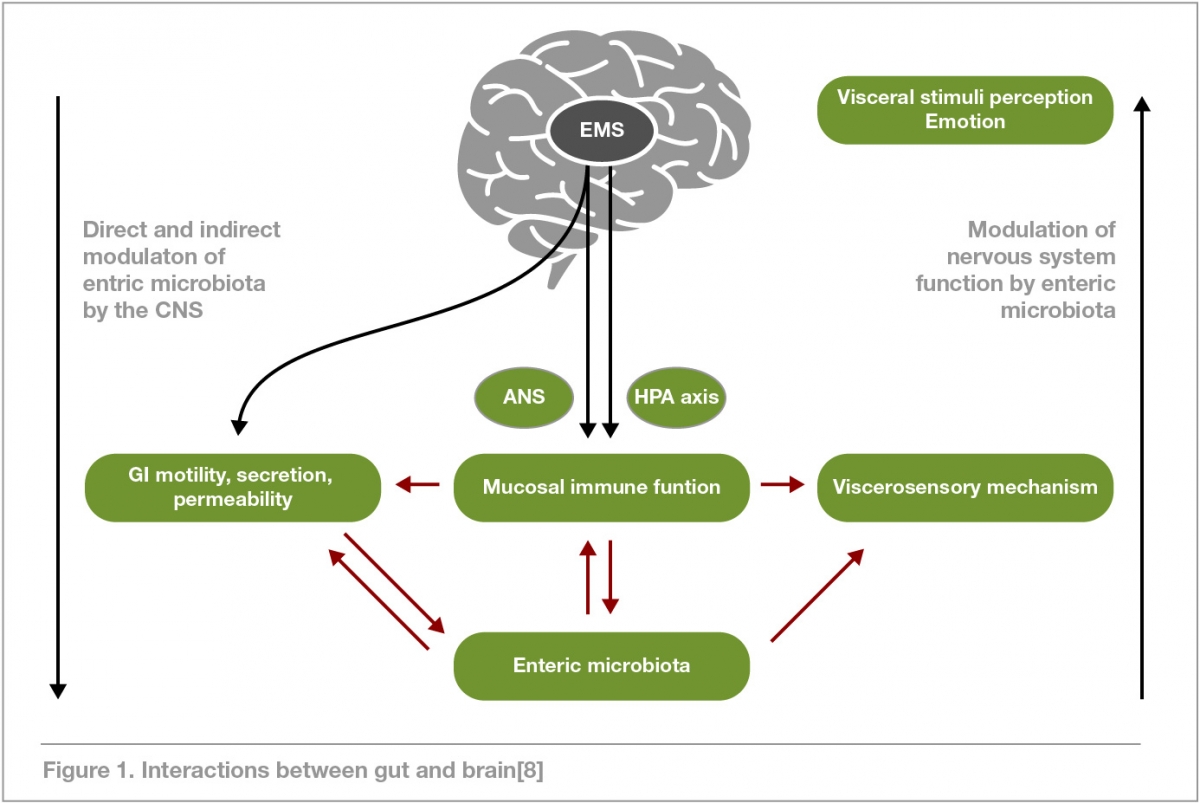 Activation of the HPA axis occurs with psychological and physical stress. This can cause a cascade reaction that releases an array of hormones into the circulatory system (glucocorticoids, corticotropin-releasing factor, catecholamines and adrenocorticotrophic hormone) ultimately suppressing the inflammatory processes in the gut. It is this response that is thought to contribute to the onset or exacerbation of symptoms in conditions such as irritable bowel syndrome (IBS), inflammatory bowel disease (IBD), leaky gut, generalised inflammation and gastrointestinal infection.[5,9]

Additionally, chronic psychological stress can have an immense impact on the proper functioning of the GIT, which can alter the composition of the gut microbiome leading to an imbalance that leaves the host susceptible to inflammation of the GIT as well as food intolerance and allergy.[5,10]

It’s important to note also that microbes in the gut can have a direct impact on the immune system through activation of the vagus nerve which can, in-turn, be the trigger for bidirectional communication with the CNS. Furthermore, the gut flora can have an indirect effect on the innate immune system (regulated by the CNS) resulting in modifications to the volume of circulating pro-inflammatory and anti-inflammatory cytokines, further affecting brain function.[11]

It’s imperative to note the vulnerability of the immune system when the gut is affected. This is because the immune system found within the gut accounts for approximately 70-80% of the entirity of the body's immune cells, suggesting an altered microbiome may have a role in initiation or exacerbation of autoimmune diseases.[12]

The combination of neural, immune and hormonal communication channels within the GBA illustrate the connection the gut and brain have and that it is possible for the brain to influence several functional cells within the GIT, which can in-turn have an effect on overall health and wellbeing.[6] It also highlights the rationale behind the gut frequently being referred to as the “second brain”.[10]

A growing body of research has shown that several gut related diseases and disorders can benefit from the implementation of MBM, particularly where psychological stress has shown to initiate or perpetuate symptoms. Examples are explained below.

IBS is a chronic functional disorder of the bowel accompanied by symptoms such as abdominal pain, discomfort and bloating along with modified bowel habits (diarrhoea, constipation or both). It is the most commonly diagnosed GI condition affecting approximately 11% of the global population and impacts a person’s quality of life, while also significantly contributing to the health-care burden.[3,13]

Stress is a key contributor to the clinical development and severity of IBS symptoms and has been shown to have notable effects on visceral sensitivity, gut motility along with autonomic reactivity.[14]

Patient satisfaction with conventional therapies for IBS, such as medications and modified diets, has been low due to side-effects experienced, a lack of treatment for the underlying causes and overall poor results. In contrast, there is a strong evidence base to support the use of several mind-body therapies such as CBT, mindfulness meditation and hypnosis, which have shown significantly improved outcomes in IBS.[3,15] Mindfulness meditation has been particlarly successful in reducing symptom severity in conditions where both pain and stress are prominent, and this incorporates both IBS and IBD as well as several other gut pathologies.[16]

The term IBD encompasses a group of chronic GIT conditions, most notably ulcerative colitis (UC) and crohn’s disease (CD), that are relapsing and remitting in nature.[7] Whilst the cause of IBD remains unknown, the rise in incidence could be attributable to industrialisation and a substantial change in diet and lifestyle habits over the years. Currently, IBD affects approximately 0.5% of the population in the western world,and a continued rise in its onset is expected in future, particularly paediatric-onset IBD.[17]

The literature shows that IBD has fewer psychiatric and social contributors than IBS. However, research on the use of MBM as an adjunctive treatment to the usual medical management continues to grow. Much like IBS, patients with IBD seek an array of holistic therapies due to a lack of success with conventional treatment alone. Interventions like CBT, hypnotherapy, meditation and relaxation techniques can all potentially have positive effects in IBD, particularly on quality of life and mental health. They may also have favourable outcomes on the course of the disease leading to periods of remission, which appears to be the predominant result of the effect MBM can have on the GBA.

These therapies directly target the physiological processes associated with UC and CD that reduces nervous system arousal and has a flow-on effect that also reduces the stress response and systemic inflammation associated with these conditions.[15] Leaky gut, also termed gut permeability, occurs when the integrity of tight junctions in the intestinal epithelium are compromised allowing bacterial antigens to pass through. Several processes within the GBA can contribute to this in response to ongoing stressful stimuli and not only does it indirectly impact on the microbial make up within the GIT, but it also alters GI secretions and modifies the mucosal immune response.[8] The modification to the microbiome can perpetuate a vicious cycle of poor mental health coupled with disease (notably autoimmune disease) given an imbalance in gut microflora can modify the mental and physical health of the host.[5]

Whilst few studies have specifically examined the benefits MBM can have on the gut microbiome, research has shown that stress can alter its composition.[10] With this in mind, and given favourable results have been observed in several other gut disorders associated with stress, it could be posited that restoring a microbial balance may be possible with the implementation of MBM techniques.

In conjunction with other holistic or conventional treatments, mind-body therapies such as CBT, midfulness meditation, relaxation and yoga may all show some effect considering each of them seeks to alter physiological functioning of the body, in this case the gut, through complete psychological reprogramming.[18] However, more human studies for the specific effect any such treatment may have in improving tight junction integrity associated with gut permeability are needed before any strong conclusions on their effetiveness can be drawn. 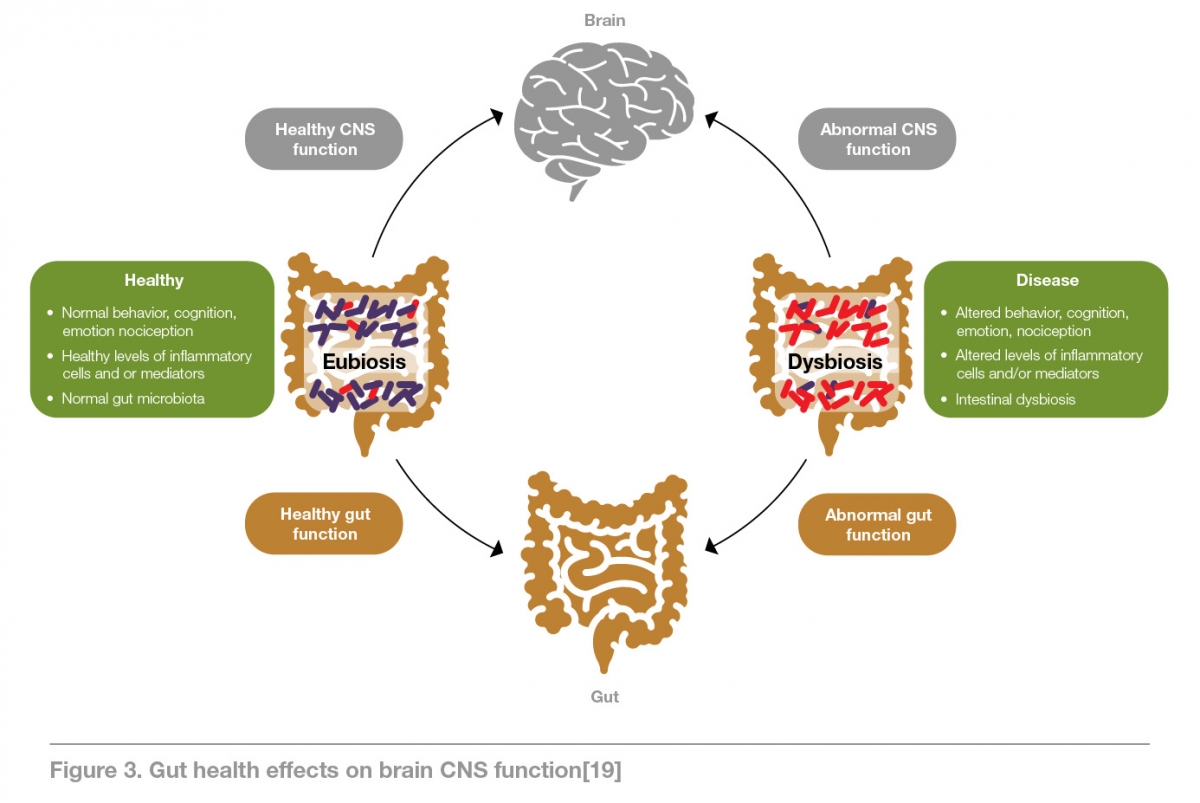 It was Hippocrates who first hypothesised that all disease begins in the gut and this may be particularly true for autoimmune disease.[21] The global rise in autoimmune diseases has occurred at an alarming rate over the last century and we are now faced with over 80 unique diseases that comprise several forms of arthritis, type I diabetes, multiple sclerosis, and the aforemention IBD as examples.

There are several theories pertaining to the onset of autoimmune disease in an individual including genetics, diet and lifestyle, nutrient deficiencies, environmental factors, HPA axis dysfunction and, as with several other conditions outlined, intestinal permeability may also play a significant role.[19]

As with gut permeability, the use of MBM in the treatment of autoimmune disease has not been extensively researched. However, implementation of any number of techniques to assist the regulation of both the GBA and HPA axis could be key to reducing disease severity. Downregulating the HPA axis through MBM methods could have a positive impact on mental and physical health, aid in the management of pain and improve quality of life though again more research is needed to comprehensively confirm this.[21]

Fundamental examples of the connection between the mind, gut and disease continue to be seen. A considerable body of research has now shown that psychological stress is a major contributing factor in the onset and relapse of numerous gut disorders. This occurs as a result of stress negatively affecting the GBA, which in-turn has flow-on effects to several body systems and the composition of the microbiome, further perpetuating the disease cycle. Several studies have now shown that an imbalance in gut flora has the potential to influence factors from disease onset and relapse right through to cognition and behaviour in an individual.

Research has also found that the use of any number of MBM techniques is associated with an appreciable decline in symptom severity in conditions such as IBS, with improved quality of life and overall pain management also being seen in IBD and other autoimmune diseases. This suggests that a variety of MBM techniques may be successful adjunct treatments to existing treatment plans for those patients who have not had favourable outcomes with conventional medical management. They may also help to reduce the global burden of disease associated with these conditions.

Whilst evidence is strongest for the use of MBM in IBS, more research is needed to prove definitively that these therapies are just as successful for the comprehensive management of conditions like leaky gut, IBD and several other autoimmune diseases. The development of new fields of research including pyschoneuroimmunology and pyschoneuroendocrinology highlight the critical link between the gut, brain and health and that the global health community are coming to understand the important role MBM can play in the management of disease.

Gabriella Campbell | The Tolerant Table
Gabriella worked in corporate communications for 12 years before commencing a Bachelor of Health Science Naturopathy. She is the author of the successful blog "The Tolerant Table" which focuses on providing information relevant to those navigating food allergies and intolerances. Gabby has a special interest in this field, but also in autoimmune disease, gut dysbiosis and adrenal fatigue. Gabriella is an accomplished writer, both for her own business, but also for an academic journal and for numerous other publications. Find her at: www.thetoleranttable.com