It seems that everywhere we look these days, there is something being written or spoken about MTHFR or methylation. Awareness is growing, and patients and practitioners are requesting to test for the MTHFR gene.  However, should we be relying on this as a single focus for treatment? Perhaps, we should we be looking a little more broadly when it comes to supporting patients.

Firstly, let’s look at what we know about the human genome and the growing popularity in testing.

Thanks to the Human Genome Project (HGP) completed in 2003, we now know that the human genome is made of 3 billion base pairs. It is nearly the same (99.9%) in all people, and humans have an estimated 30,000 genes, more than half of which we are yet to understand their function.

There can be variations to these base pairs.  These are called SNPs (single nucleotide polymorphisms).  A SNP is when a single nucleotide substitution of one base for another occurs in at least 1% of the population. For example, a SNP may replace the nucleotide cytosine (C) with the nucleotide thymine (T) in a certain stretch of DNA.[1]  It is estimated that there are 10 million SNPs in the human genome! When a SNP occurs in a gene or in a regulatory region near a gene, it may play a role in the individual’s health by affecting the gene’s function.

Whilst the HGP helped to identify some genes that are linked to a specific disease, we are still learning and research is being performed about the interaction between genes, nutrients and the environment.

The HGP has also meant an improvement in technology to now make genetic testing much more affordable and accessible. This has enabled the blossoming of testing providers to offer direct to patient or practitioner gene testing, and today individuals are increasingly discovering information about their SNPs.

One of the most exciting and interesting benefits of gene testing in practice is that it enables the practitioner to truly provide individualised, personalised support for their patients. What is most exciting is being able to look at genes, understand the associated health risks and strengths, and discuss with the patient suggested strategies to optimise their health.

Importantly, this needs to be done in the context of understanding broader information about that patient such as lifestyle choices, symptoms, family health history, diet, exposure to toxins and current nutrient status, just to name a few. This is because SNPs are not a ‘done deal’; whilst your genes don’t change, there are factors that contribute to whether they are expressed or not. For example, some polymorphisms may not be an issue unless it is in an environment of low folate or vitamin B12.

One other concern about gene testing is the perception that having a SNP is a ‘diagnosis’. We often have individuals come into our clinics and state they have been ‘diagnosed’ with MTHFR and want to know what supplement to take to ‘fix’ it, or search on the internet and start self-prescribing supplements with less than positive effects. Quite simply, having the MTHFR SNP is not a ‘diagnosis’ and it's not quite that simple.

So why do we get so excited about this SNP and should we be relying on it to treat patients?

This enzyme is a component of the one-carbon metabolism pathway; or more commonly known as the methylation process.

What is methylation and why is it so important?

Methylation is involved in a number of important biochemical processes in the body including gene expression, DNA and RNA synthesis, immune cell differentiation, neurotransmitter synthesis, histamine clearance, detoxification, hormones, mitochondrial metabolism, phospholipid synthesis and myelination, and neural tube development. It occurs in almost all cells in the body.

Methylation involves the transfer of active methyl groups and when utilised, SAMe (S-adenosylmethionine) is converted to SAH (S-adenosylhomocysteine), and then homocysteine.  The recycling of homocysteine to methionine can occur via two pathways – via methionine synthase conversion that requires the transfer of a methyl group from 5-methylenetetrahydrofolate reductase (5-MTHFR) by MTHFR or via betaine homocysteine methyltransferase (BHMT).   During higher states of oxidative stress, homocysteine may be converted to cystathionine and then to taurine, glutathione or sulfate via the transulfuration pathway (see figure 1). 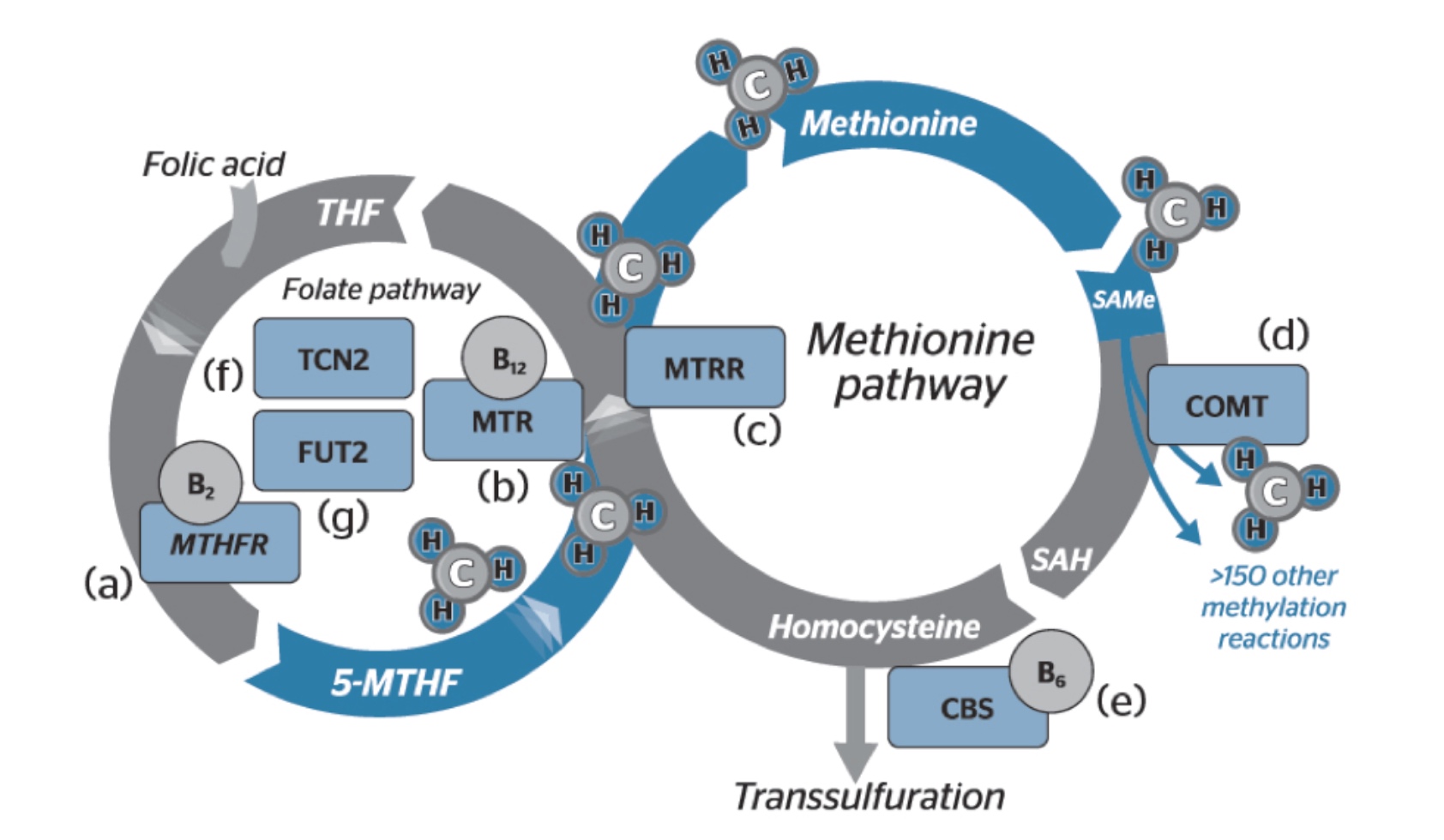 What conditions are associated with methylation?

What factors influence methylation and should be considered?

Many research studies, on both animals and humans, suggest that methylation status can be impacted by nutrient availability including folate, vitamin B12, choline and vitamin B6.  However, lifestyle, environmental factors and other modulators can also impact overall methylation status.
These include:

Some diets may not have sufficient levels of nutrients to support methylation. A diet low in green leafy vegetables may mean low folate status, and similarly, a poorly managed vegetarian diet may be too low in vitamin B12. Other nutrient levels to consider include choline and vitamin B6.

Alcohol
A study suggested that the recent use (consistent alcohol intake over six months) impacted the DNA methylation of the individuals.[4]

Gut health and the microbiome
Studies on mice and faecal transplants have suggested that the microbiome impacts methylation regulation. There are a number of folate-producing bacterial species that may impact methylation including L. plantarum.[5]

Exercise
Research suggests exercise has an impact on methylation, with a study on arterial stiffness showing that fitness may have a protective effect on those with the MTHFR C677T polymorphism.[8]

Sleep
A study on the effects of epigenetics and sleep found that sleep deprivation impacted methylation, which subsequently impacted brain function and mental health.[12]

SNPs
There are a number of SNPs other than just MTHFR involved with the methylation process and these should also be considered.

What other SNPs should be considered?

As methylation is important to many processes in the body, the MTHFR gene is important to consider in conjunction with other biomarkers and case taking, however it’s not the only SNP involved in this process.

Other SNPs to consider that are part of the folate and methionine-homocysteine pathway include, but are not limited to, MTHFD1, SHMT, BHMT, MTR, MTRR, CBS.  SNPs that impact B12 are also useful to consider, such as FUT2 and TCN2. When considering what other SNPs to explore, it is helpful to review what factors influence methylation and perhaps what biochemical pathways may be effected based on the individual’s case history and symptoms.
The following are some SNPs to consider:

What other factors should be considered?

The bottom line is not to rely on looking at only one particular gene. It is important to review the total picture, looking at multiple genes and other biomarkers, the individual’s symptoms, nutrient levels, gut health, exposure to toxins, diet and so on. The important thing is to have a holistic approach and make the appropriate recommendations accordingly.

What other testing might need to be considered for those with the MTHFR gene?

There are a number of general pathology and function pathology tests that may give clues to methylation status and impact on health.  This may include: RBC folate, serum vitamin B12, full blood count, homocysteine, histamine, liver function tests, lipid studies, vitamin D and other SNPs.

Treat the whole patient, not just the SNP!

Genetic testing is a great tool to add to your practice, to enable you to dig deeper into  an individual’s health concerns. However, knowing the individual’s SNPs is not a recipe for a standard treatment protocol. It is not a case of ‘one size fits all’. Instead, it provides further insight to enhance the information you obtain about your patient and further individualises the treatment and support you can offer.

Currently, Lisa holds a position on the board of ARONAH (Australian Register of Naturopaths and Herbalists) whilst also running her clinical practice in Sydney. You can find Lisa at www.indigosagehealth.com.au