Originally identified in the 1950s by Dr Abram Hoffer, Dr Humphrey Osmond and Dr Carl Pfeiffer, pyrrole disorder, or pyroluria, refers to a condition that results in an overproduction of pyrroles or hydroxyhaemopyrrolin-2-one (HPL). HPL is a by-product of haemoglobin (Hb) synthesis and the disorder reflects an abnormality in the synthesis and metabolism of Hb.[1-3]

Most individuals have low levels of pyrroles at any given time, but pyrrole disorder is identified by an unusually elevated level of pyrroles in the urine.[1,2] Most people have less than 10mcg/dL of HPL in their urine. The upper limit of normal for HPL varies between 8-20 mcg/dL and levels greater than 20 mcg/dL are considered to be positive for pyrrole disorder.[1,4]

Pyrrole disorder is also known by the name ‘Mauve Factor’ due to the purple appearance of pyrroles in urine chromatograms stained with Ehrlich’s reagent.[5]

It was through Hoffer’s interest in the possible biochemical aetiology of schizophrenia that HPL was discovered. Elevated HPL has been documented in many cognitive, affective, and neurobehavioural disorders and is linked to the following conditions:[3,4]

Who does it affect?

Pyrrole disorder affects up to 10% of the population, and the incidence can increase to 18-35% in people with psychological disturbances, learning or behavioural problems. Children with behavioural issues, ADHD and autism have been found to have pyrrole disorder in association with high levels of oxidative stress.[6,7]

Although HPL concentrations tend to be high in patients with mental illness, elevated levels of HPL are not specific to these patients.

Subjects with elevated histamine levels may also have elevated HPL, indicating an allergy component to the condition.[5]

Pyrrole disorder should be considered in patients who may not respond to medications such as SSRIs and antipsychotics but show improvement with nutritional therapy.[8]

Epigenetic vulnerability is associated with pyrrole disorder.[1] The severity of the condition is impacted by stress and may also be triggered by a traumatic event.[8] 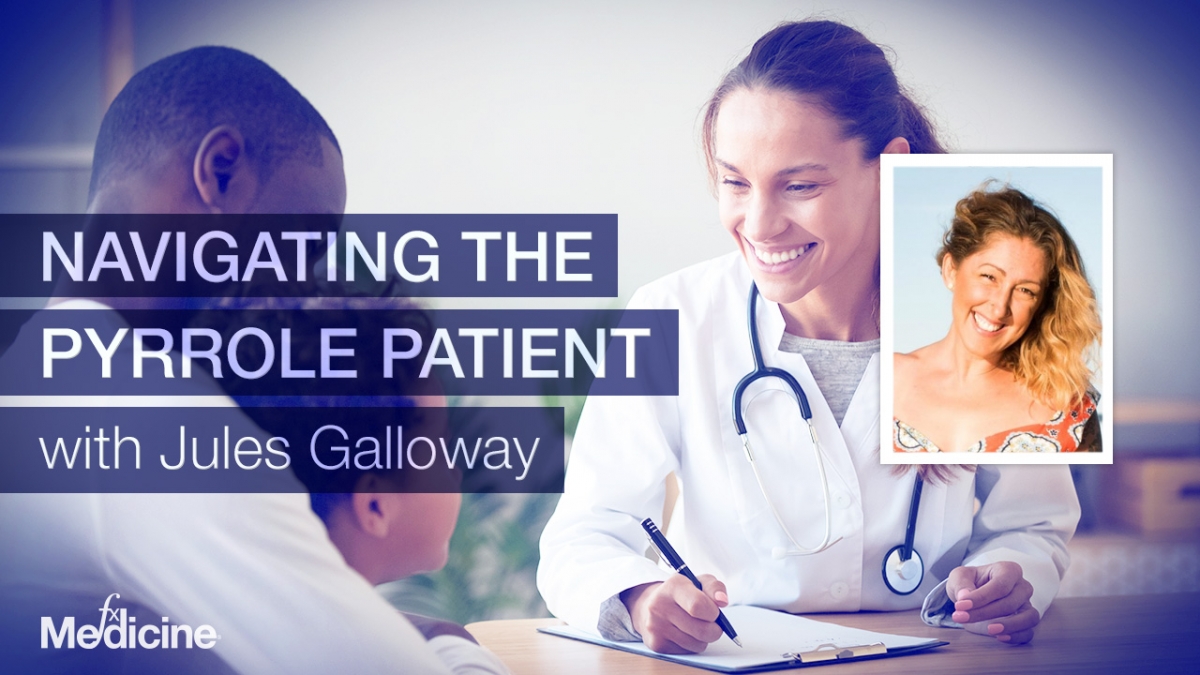 Symptoms manifest as vitamin B6 and zinc deficiency

HPL binds several nutrient cofactors, in particular vitamin B6 and zinc, essentially rendering them unavailable for use by the body.[2,4] B6 and zinc are critical for digestion, immune function, cognition and emotion, and chronic depletion can have serious consequences on wellbeing. The signs and symptoms of pyrrole disorder correlate with a deficiency of B6 and zinc.[3]

Nutrients including biotin, magnesium and manganese are also altered in this condition due to their intricate association with B6 and zinc and their biochemical roles in metabolism and neurotransmission.

The breakdown of haem is fundamental to the mechanisms for HPL formation and accumulation in the body.[5] Depression of haem lowers zinc, B6 and biotin, increases nitric oxide and antioxidant leak from mitochondria and augments oxidative damage to cells.[4,7] As a marker for B6 and zinc deficiency, HPL is also a potential biomarker for oxidative stress.[2-4,6]

Neuronal metabolic activity is dependent on haem, and depression of haem leads to metabolic crisis that negatively affects mitochondria and neurons. The corresponding depletion of B6, zinc and magnesium results in elevated levels of oxidative and neural toxicity and depleted production of calming neurotransmitters such as GABA and serotonin.[2,4]

Elevated HPL has been linked to digestive disorders.[3] Imbalance in gut flora may alter haem biosynthesis and a relationship exists between elevated pyrrole levels and elevations in indicans and urobilinogens.[5]

GABA dampens nerve activity in the brain leading to feelings of calm and relaxation. As the main inhibitory neurotransmitter, GABA modulates anxiety. Serotonin controls mood, appetite and sleep. Individuals with depression often have lower levels of serotonin. Imbalance in dopamine levels have been linked to schizophrenia and ADHD. Dopamine influences motivation and plays a role in one’s perception of reality. Involved in the brain’s reward system dopamine is also thought to play a role in substance abuse. Norepinephrine can trigger anxiety and is involved in some types of depression.[11,12]

Deficiencies in nutrients including B6, zinc and polyunsaturated fatty acids (PUFAs) are linked to mood disorders as these nutrients play an important role in neurotransmitter and neurologic function.[2]

Pyridoxal-5-phosphate (P5P) is the metabolically active, phosphorylated form of vitamin B6 and is a coenzyme for the biosynthesis of GABA, dopamine, norepinephrine and serotonin. Vitamin B6 concentrations are significantly higher in the brain than blood levels hence B6 deficiency has pronounced neurologic effects.[13] P5P protects neurons from oxidative stress, possibly by increasing energy production and lowering excitotoxicity.[4]

Zinc has catalytic, structural and regulatory roles in cellular metabolism in the brain. It has a role in neurotransmission mediated by glutamate and GABA.[13] There is also growing evidence that major depressive disorders are associated with reduced serum levels of zinc.[14] Anxiety is further aggravated if copper levels are elevated due to zinc deficiency.

Combined with a wholistic nutritional approach, correct diagnosis of pyrrole disorder is critical to successful management of the condition. Long term supplementation of B6 and zinc is necessary for ongoing suppression of HPL and associated symptoms.[4]

Vitamin B6 (200-800mg daily) in combination with zinc (25-100mg daily) has been shown to suppress HPL and achieve an optimal symptomatic response (optimal initial doses may be higher than maintenance doses). Higher urinary HPL may require a proportionately higher dosing of B6 and zinc. Measurements of HPL at regular intervals will help to determine maintenance dosages of these nutrients on an individual basis.[4,9]

Primary determinants of B6 dosing are clinical symptoms and the suppression of HPL. Useful signs include poor recall of dreams or morning nausea and/or anorexia.[9]

Periodic testing of a patient's zinc levels is recommended to monitor zinc to copper ratio. Taking 50mg/day or more of supplemental zinc over a period of time can interfere with the bioavailability of copper as high zinc intake induces the intestinal synthesis of metallothionein, a copper binding protein.[9,15]

Pyrrole disorder may manifest as a result of poor diet and/or digestive issues contributing to depletion of essential nutrients. Intestinal permeability should be considered when a patient presents with elevated HPL.[7] A multistrain probiotic and nutrients to support intestinal permeability including zinc will facilitate appetite and improve nutrient assimilation.[16]

Stress management is crucial for these patients as is supporting adrenal health. Increased HPL excretion is classically associated with emotional stress, which is also associated with oxidative stress.[9] Adrenal support could include the use of adaptogenic herbs such as withania and ginsengs.

Prolonged physical or emotional stress elevates adrenaline and cortisol and these both interfere with serotonin. Low serotonin can also exacerbate sugar cravings.[17]

Magnesium is important for normal brain function and deficiency results in both neurologic and muscular symptoms. Habitual inadequate intake of magnesium may also result in a chronic state of inflammation, which can potentially amplify depressive symptoms. High doses of zinc in supplemental form may interfere with magnesium absorption, so supplementation of these minerals should be staggered.[13,18,19]

Manganese is involved in the conversion of glutamate to glutamine in the brain. Glutamate is an excitotoxic neurotransmitter and a precursor to GABA, an inhibitory neurotransmitter.[20] Suppression of manganese may result from excessive zinc supplementation.[9]

Biotin is involved in the metabolism of fatty acids and amino acids and a deficiency contributes to neurologic symptoms including depression.[13]

Vitamin C accumulates in the central nervous system, particularly in the neurons. It is required for the conversion of dopamine to norepinephrine, and prevents oxidative damage to the lipids and proteins in the brain.[13]

Essential fatty acids are essential to normal brain and behavioural function. Elevated HPL depletes gamma linolenic acid (GLA) alongside zinc, B6 and magnesium which are required for EFA conversion in the body.[2,9,21]

Belinda Fay
Belinda Fay is a Naturopath with a science degree majoring in Biochemistry and Microbiology. As a writer Belinda has been producing educational material for the complementary health care industry for over 15 years.  Belinda's areas of interest include food as medicine and minimising toxicity in daily living. She is a strong believer in food as medicine and as such loves cooking and learning about traditional foods of different cultures.