Folate was first identified in the 1930s, where it was described as a ‘new haemopoietic factor’ found in yeast and liver, which was found to cure macrocytic anaemia. Further research in the 1940s resulted in the synthesis of pteroylglutamic acid from spinach, which was named folic acid after the Latin folium, meaning leaf.[1,2]

Folate is the general term used to describe a group of chemically similar forms of the water-soluble vitamin known as vitamin B9. Folate in food is known as pteroylpolyglutamate, with the richest sources including green leafy vegetables, sprouts, fruits, brewer’s yeast, liver and kidney.[3]

Folate is the general term used to describe a group of chemically similar forms of the water-soluble vitamin known as vitamin B9.

Dietary folates may be readily destroyed by cooking or processing, with a bioavailability approximately 40-50% less than that of synthetic folic acid.[4]

Folic acid is the form most commonly used in supplements and food fortification. Other supplemental forms of folate include folinic acid and 5-methyltetrahydrofolate (5-MTHF), both of which appear to have benefits over folic acid in terms of bioavailability and efficacy for certain individuals.

Through its role as a methyl donor, folate is involved in a range of biochemical reactions including neurotransmitter synthesis, DNA biosynthesis, regulation of gene expression, and amino acid synthesis and metabolism.[5]

Folate is an essential nutrient with its main biological action centering on its role as a methyl donor and its involvement in one-carbon metabolism, whereby folate coenzymes (or cosubstrates) accept or donate one-carbon units. Biochemical reactions dependant on folate coenzymes include DNA and RNA synthesis, amino acid metabolism and neurotransmitter synthesis.

Folate coenzymes are involved in the synthesis of purines and pyrimidines that comprise DNA, making it essential for cellular division. Folate reduces damage to DNA, prevents replication errors, provides genomic stability and is involved in the repair of genetic material.[4,6] A deficiency of folate may be associated with disturbed cell cycling, cell apoptosis and increased rate of cell death.[4]

Folate is essential for the metabolism of several amino acids including methionine, cysteine, histidine, serine and glycine.[7] Folate, together with vitamin B12, is required for the metabolism of homocysteine through its remethylation into methionine. Low folate levels are associated with decreased synthesis of methionine and increased plasma homocysteine levels, which is a risk factor for atherosclerosis, recurrent thromboembolism, deep vein thrombosis, myocardial infarction, ischaemic stroke, dementia and cardiovascular disease mortality.[4,7]

Following the remethylation of methionine from homocysteine, the methyl group donated by folate allows for the conversion of methionine into S-adenosylmethionine (SAMe).[6] SAMe is subsequently able to function as a methyl donor in the synthesis of neurotransmitters including serotonin, dopamine, adrenaline, noradrenaline and histamine.[8] Folate deficiency is common in individuals with depression and is also associated with poor response to antidepressant treatment and relapse.[4,9] Supplemental folate is available in several forms including folic acid, folinic acid and 5-MTHF, each of which require varying degrees of metabolism and activation before they can be effectively utilised by the body as active folate. 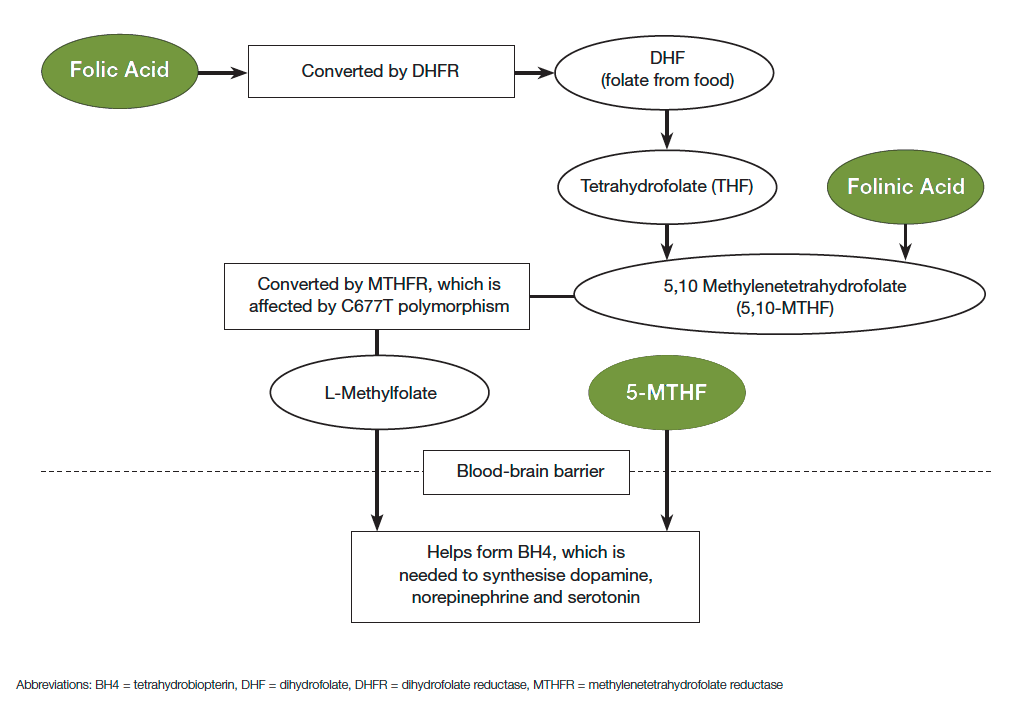 Folic acid is a synthetic, oxidised form of folate with a high degree of stability and an absorption rate of 85-95%, compared to 50% of folate from dietary sources.[5,10] It is widely used in supplements and fortified foods due to its stability, although it needs to be reduced intracellularly to tetrahydrofolate (THF) in order to become metabolically active.[11] The conversion process to the metabolically active coenzyme form of folate is complex and dependent on several enzymes including methylenetetrahydrofolate reductase (MTHFR) in addition to an adequate supply of nutrients including riboflavin (vitamin B2), niacin (vitamin B3), pyridoxine (vitamin B6), zinc and serine.[3]

Individuals with genetic polymorphisms of the MTHFR enzyme have varying degrees of impairment of folic acid metabolism, resulting in decreased production of the active form of folate, 5-MTHF.[5,11] Individuals with these genetic polymorphisms may benefit from supplemental 5-MTHF, thereby bypassing the steps required with folic acid supplementation.

Folinic acid appears to be a more metabolically active form of folate and is an immediate precursor to 5,10-methylenetetrahydrofolate (5,10-METHF), which in turn is rapidly metabolised to produce active folate (5-MTHF).[3]

5-methyltetrahydrofolate (5-MTHF) is the active form of folate and the major circulating form of folate in the body.7 5-MTHF is also the predominant type of folate found in food.[11]

5-MTHF does not require the enzymes methylenetetrahydrofolate reductase (MTHFR) or DHFR, and is able to cross the blood-brain barrier.

Supplementation with 5-MTHF is unlikely to mask the haematologic signs of vitamin B12 deficiency even at high intakes, which may occur with folic acid supplementation.[10] 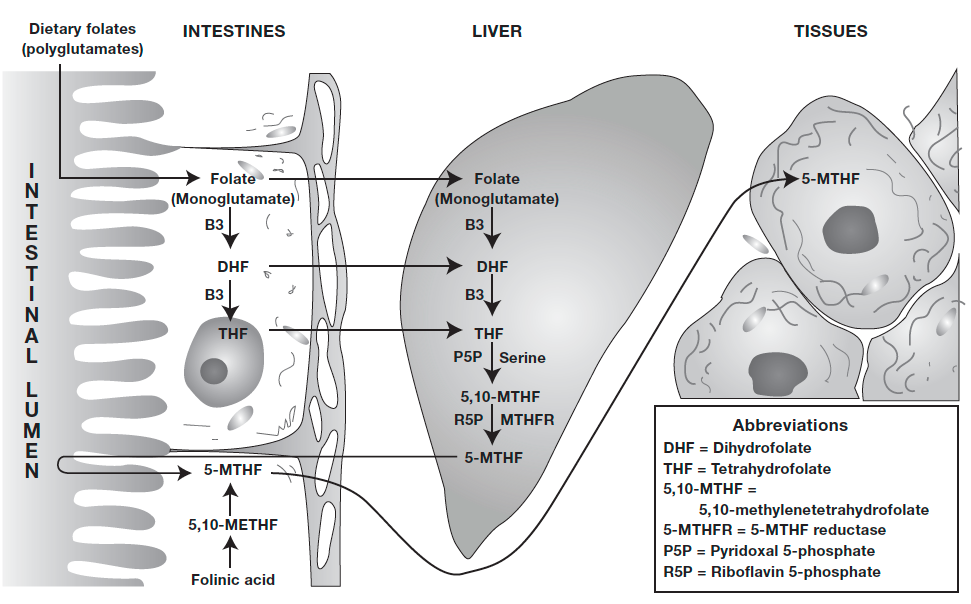 Background: Folate is essential for the synthesis of noradrenaline, serotonin and dopamine, with a deficiency associated with depression, poor cognitive performance and reduced response to antidepressant medications.

Results: All three forms of supplemental folate – folic acid, folinic acid and 5-MTHF, appear to be well tolerated and efficacious for individuals with depression. Supplementation may enhance antidepressant medication efficacy and may convert nonresponders into responders.

Background: To examine the role of folate supplementation before and during early pregnancy in reducing neural tube and other birth defects without causing adverse outcomes for mothers or babies.

Subjects/Method: Scientific literature review involving 6105 women (1949 with a history of a pregnancy affected by a NTD and 4156 with no history of NTDs).

Results: Overall, the results showed a protective effect of daily folic acid supplementation in preventing NTDs, compared with no intervention or placebo. Folic acid had a significant protective effect for reoccurrence. The reviewers concluded that folic acid, alone or in combination with vitamins and minerals, is effective for the prevention of NTDs, although its effect on other birth defects is not clear.

Mandatory folic acid food fortification has been implemented in a number of countries to reduce the occurrence of NTDs and associated morbidity and mortality. Although these fortification programs have proved successful in reducing the prevalence of NTDs, possible concerns have been raised. These include masking of B12 deficiency anaemia, promotion of cancer, changes in epigenetic patterns and increasing levels of circulating unmetabolised folic acid.[18,19]