Having an understanding of what is currently known about the BH microbe, and being aware of the use of non-pharmaceutical measures, will guide many therapists towards safe and effective individual protocols, where treatment, regardless of symptom status, can increase overall health and wellbeing.

What is Blastocystis hominis?

First thought to be a commensal member of the lower intestinal microbiota and considered harmless until the 1970s, the pathogenic potential of BH is still controversial. As it is found in both symptomatic and asymptomatic individuals, its role in human disease remains unsubstantiated with studies providing unconvincing and disputable results.[1-3]

Incorrectly classified in 1849, BH eventually found its taxonomical home as a member of the protist group - unicellular anaerobic microscopic eukaryote, based on its characteristics and sensitivity to antiprotozoal drugs.[1] 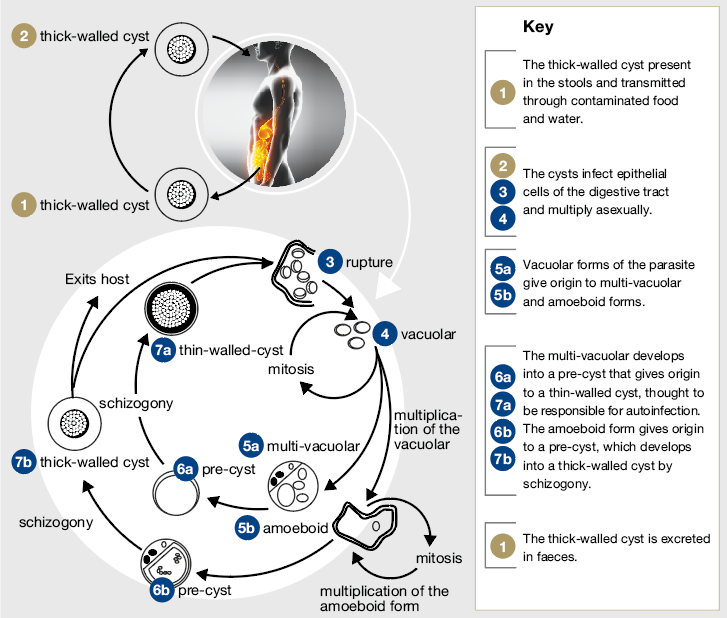 This ubiquitous parasite is widely spread across the globe affecting humans, animals, reptiles, amphibians, fish, rodents and birds, and has been identified as the most common eukaryote (animal, plant, protozoan or fungal organisms) in human stool samples. Prevalence is higher than that of Giardia, Entamoeba or Cryptosporidium.1,2 In developed countries, prevalence is at least 5-15%, but because of poorer sanitation and hygiene practices, developing countries can
have 50-100% infection rates.[2]

BH is transmitted mainly by the faecal-oral route from person to person or animal to person, through the consumption of contaminated food or water, inhalation of aerolised faeces (due to the cleaning of animal enclosures in zoos and farms), mechanical transmission from flies or cockroaches, or unhygienic sexual practices.[3]

Lack of standardisation in detection techniques and methods for molecular characterisation has meant the virulence and life cycle of BH is still under investigation. However, it has been distinguished into different forms: vacuolar, granular, ameboid and cystic.[1,2]

The forms commonly found in stool samples are the thick walled cysts, which are believed to be responsible for external transmission. They can vary in size from 5-30mcm.[4]

However, the ameboid forms are the most virulent and are found most commonly in symptomatic patients; although, they are harder to recognise in routine stool sample examinations as they resemble neutrophils and macrophages.[1]

The ameboid forms have considerable cohesive properties, easily attaching to the intestinal mucosa. They also secrete proteases and lysates that cause bowel permeability and produce interleukin-8 (IL-8) increasing bowel inflammation. To ensure their survival they also cleave the protective gut immune antibody, secretory IgA.1 The infiltration and inflammation of the gut wall with a disruption in immune system homoeostasis may cause the resulting gut symptoms.5 Additionally, infection with BH correlates withhigh levels of oxidative stress.[2]

Recent classification has revealed this protozoan parasite to be genetically diverse with 17 subtypes (STs) discovered so far and suggestions that the name BH should be replaced with “Blastocystis species”. These subtypes may affect clinical manifestations with ST 1-4 causing 90% of the symptoms.[1,2]

Studies have shown a geographical difference in the ST types, with a high prevalence of ST1 and ST3 in Australia, Europe and south eastern Asia.2 ST3 is the most common human subtype, followed by ST1 and ST2; however, there has been little evidence of the pathogenicity of ST3, with conflicting results on symptom correlation with ST1 or ST2. The other STs have been associated with varying degrees of gastrointestinal symptoms.[1]

The ability of BH to cycle through its various stages of development and cause symptoms may actually depend on the compatibility of particular STs with the infected host, along with the diversity of bacteria within the individual’s intestinal environment.[1,2]

Signs and symptoms of blastocystosis

As stated earlier, infection with BH, or blastocystosis, does not always equate to any signs or symptoms. In fact, there are more asymptomatic than symptomatic cases.[1] Although the life cycle of BH is not yet fully elucidated, the average growth time in cultivation is 17-22 hours. This differs according to the ST and does not necessarily correlate with symptom manifestations. Mild symptoms may occur when initially infected and worsen over months or years. Therefore, blastocystosis can be an acute self-limiting condition or produce chronic illness.[1,3,4] When symptoms do appear they are non-specific, with abdominal pain and diarrhoea being the most common. The higher the number of parasites found in the stool the greater the symptom severity, and may include any of the following:

Blastocystosis has also been potentially linked to fatigue, skin rashes and joint pain.[6]

Blastocystosis has been associated with irritable bowel syndrome (IBS), colitis, colon cancer, urticaria and peritonitis; however, the data is still inconclusive that BH is the primary cause.[1,3] Studies have shown the infection to be more prevalent in IBS sufferers. Interestingly, one clinical trial showed an increase in colitis in children with BH, while in another experimental study this parasite stimulated the increase in protective mucus production, potentially benefitting colitis.[1,2] In those with urticaria, the ameboid form of ST3 has been identified. It is believed the ability of ST3 to disrupt immune system function and create significant oxidative stress may be the reason for extraintestinal symptoms.[1,2]

The evidence of BH in a stool sample may or may not be clinically valuable in asymptomatic individuals. However, HIV infected patients, individuals with cancer or other immune system disturbances, frequent travellers and children from developing countries are more susceptible to infection1 and may require treatment, even if not showing any symptoms.

Studies show that children and the elderly are highly susceptible to infection; however, other research shows people between the ages of 30-50 years as being most prone. Additionally, nutritional status is classed as a risk factor for co-infections.[2]

Therefore, it is always recommended with the discovery of BH in a stool test, to examine the presence of other infective agents1 and consider the individual’s demographics, immune, gut microbiota and nutritional health, symptomatology, and comorbidities before treatment.

Metronidazole (MTZ) is the first line medical treatment in cases of proven infection. However, its effectiveness varies, possibly due to the different subtypes, but there is also the possibility of resistant BH subtypes. Additionally, MTZ can cause undesirable side effects.[1,2]

Therefore, treatments that utilise safe and natural strategies are sought for both symptomatic and asymptomatic patients. Dietary management studies show that those on lactose free and/or high fibre diets have greater clinical improvement than those treated with MTZ. Other research reveals a link between diet-mediated alterations of the microbiota with microbiome diversity, parasite proliferation and symptom severity.[3]

Allium sativum (garlic), Zingiber officinale (ginger) and asafoetida (Ferula asafoetida) may also be effective additions to the diet, with studies showing antiparasitic and protective effects against BH.[1,2]
One compound that has also had specific research correlating with improvements in blastocystosis is the probiotic Saccharomyces boulardii (SB). In a randomised single-blinded clinical trial on symptomatic children with positive stool tests, SB had comparable results to MTZ. The SB group took 250mg twice a day for 10 days.

In comparison to MTZ at 30mg/kg twice daily and the control group, they found at day 15 the clinical cure and cyst clearance rate from the stool was the following:

At the end of the first month, the clinical cure rate increased to 94.4% in the SB group and 73.3% in the MTZ group, signifying SB as an effective treatment for blastocystosis.[7]

Lifestyle factors may also have an impact on infection rates with one experimental study showing chronic stress exacerbated infectivity and pathogenicity of this parasite. At study completion, the chronically stressed animal group had higher BH stool cyst count, increased susceptibility to infection, dysregulated immune responses, lower antioxidant levels and higher levels of lipid and protein oxidative damage.
The authors concluded that “Lifestyles today are becoming increasingly stressed and the present findings suggest that the parasite which has been reported to be one of the most common organisms seen in stool surveys, namely in developing countries, may tend to be more pathogenic in stressful situations.”[8]

Other natural therapies that should be considered as part of an effective treatment for blastocystosis are multispecies probiotics and colostrum for gut wall health, microbiota support and immune regulation, and the antiparasitic herbs and compounds, Juglans nigra (black walnut), Berberis vulgaris (barberry), Artemisia annua (wormwood) and Citrus x paradisi (grapefruit seed extract).

Additionally, preventative measures including good personal hygiene and sanitary measures are critical. As the cysts are resistant to the sterilisation effects of chlorine, boiling drinking water or using carbon block water filters and ultraviolet light is prudent to reduce infection rates.[3]

Melissa Peterson has been a writer and educator in the health and medical science fields for over 15 years. Naturopathically trained, Melissa also has postgraduate qualifications in literature research and reviewing. Her business, Words On Therapy, provides many services to industry including technical articles, white papers, blogs, SEO content, copywriting and research collation.