D-glucaric acid is a natural, non-toxic compound produced by the body in small amounts, in addition to being found in fruits and vegetables: the richest sources include oranges, apples, grapefruits and cruciferous vegetables.[1,2]

The therapeutic benefits of calcium D-glucarate stem from its ability to indirectly inhibit beta-glucuronidase, an enzyme produced by colonic microflora which may disrupt phase 2 detoxification. Elevated beta-glucuronidase activity has been linked to increased risk of various cancers, in particular hormone-dependent cancers such as breast and prostate cancer.[2] 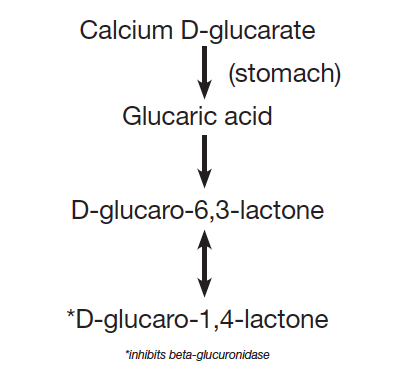 Detoxification and inhibition of beta-glucuronidase

Beta-glucuronidase is an enzyme produced by the colonic microflora.
It has a detrimental effect on detoxification by deconjugating glucuronide conjugates that are formed during phase 2 detoxification.[3] This breaking of the toxin-glucuronic acid bond allows for toxins and hormones to be reabsorbed rather than excreted.

Increased beta-glucuronidase activity has been associated with an increased risk of certain cancers including breast, prostate and colon.[2,4] By inhibiting beta-glucuronidase, calcium D-glucarate supports phase 2 detoxification by preventing the hydrolysis of glucuronide conjugates and increasing the detoxification and elimination of hormones, toxins and carcinogens.[5]

The majority of research surrounding calcium D-glucarate has focused on its effect on tumour growth and the prevention of cancer. In vitro and animal studies have shown that calcium d-glucarate inhibits the initiation and promotion of cancer cells by interacting with signal transduction pathways, inhibiting beta-glucuronidase activity, reducing pro-inflammatory cytokines, while also inducing apoptosis.[6] A range of studies have been conducted on breast, colon, liver, lung, prostate and skin animal tumour models, with the majority of research focusing on breast cancer.[3]

Pro-inflammatory cytokines are found in various tumours and may promote the transformation of precancerous cells to malignant cells, while also promoting tumour progression.[7]

Researchers have suggested that the formation of 1,4-GL from calcium D-glucarate may be the prerequisite for the prevention of breast, prostate and colon cancer in humans.[5]

Oestrogen is metabolised in the liver during phase 2 detoxification, specifically via the glucuronidation pathway. Oestrogen combines with glucuronic acid forming an oestrogen-glucuronic acid conjugate.[8] This conjugate is then eliminated via the bile, allowing the body to maintain healthy oestrogen levels.

Increased beta-glucuronidase activity splits the oestrogen-glucuronic acid bond, causing the free oestrogen to be reabsorbed, which may increase oestrogen levels or lead to oestrogen dominance and a disturbed oestrogen:progesterone ratio.

Animal studies have shown that calcium D-glucarate lowers serum oestrogen levels and increases its urinary excretion.[5] This appears to be due to the inhibition of beta-glucuronidase causing reduced oestrogen reabsorption and lower circulating oestrogen levels.[8] 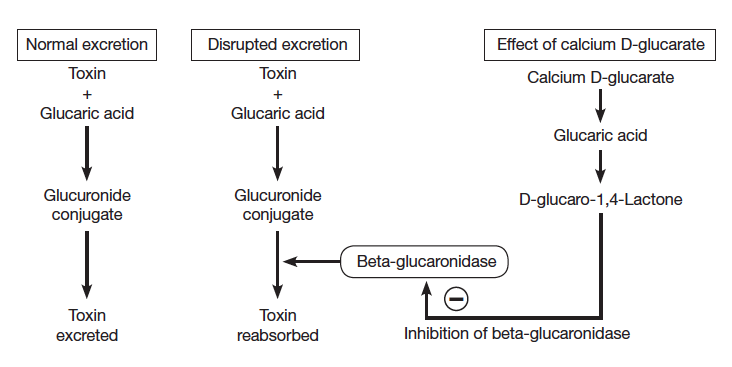 Background: To investigate the effect of dietary calcium D-glucarate on inflammatory cytokines, inflammatory biomarkers and apoptosis in lung tumorigenesis.

Background: To demonstrate the in vivo formation of the beta-glucuronidase inhibitor D-glucaro-1,4-lactone (1,4-GL) from a D-glucarate salt and determine its metabolism, uptake by selected organs and excretion following oral administration.

Results: D-glucarate administration resulted in the formation of 1,4-GL in the stomach of rats. The researchers concluded that the formation of 1,4-GL from d-glucaric acid derivatives may be a prerequisite for the inhibition of chemical carcinogenesis in rodents, and the prevention of breast, prostate and colon cancer in humans.

Background: To evaluate the effect of calcium D-glucarate on rat mammary carcinogenesis, compared to a known chemopreventive agent (N-(4-hydroxyphenyl) retinamide).

Intervention: Dietary calcium glucarate (128 mmol/kg) fed during either the initiation, promotion, or combined initiation and promotion phases of mammary carcinogenesis.

Results: Compared to controls, mammary tumour incidence was reduced in the initiation phase by 18%, the promotion phase by 42% and both phases by 50% in rats fed a calcium D-glucarate-enriched diet.

Dosage range according to clinical studies

As human trials utilising calcium D-glucarate are still in the preliminary stages, the optimal recommended dosage is yet to be determined. The current available literature suggests a daily dosage of 1500-3000mg.[3]